This is my wife’s favorite Wright building.  It is certainly one of my favorites too.  This home was built in 1936-7 for Herbert Johnson, Jr. as his residence.  According to fable, when Mr. Johnson said that his office building (The S.C. Johnson Wax Administrative Building) was so beautiful that he had thought of moving in, Mr. Wright told him that he would design a home that would be much more conducive to comfortable living.  And design it he did. 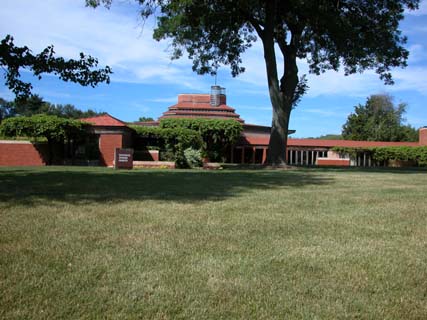 Wingspread has a central core of a living room with 4 wings coming off at 90 degree angles…. somewhat representing the prop of an airplane.  Each wing has its own purpose.  One has living quarters, one has the kitchen, one has guest quarters and the other is office space.  The dining room is part of the central room, just on a slightly higher level. 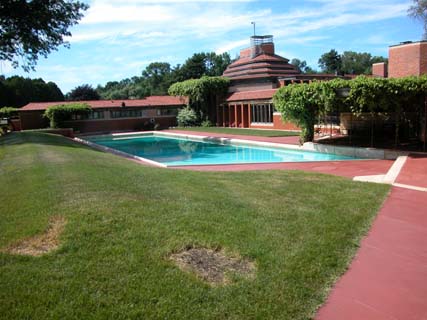 One of the wings has the swimming pool along side it. 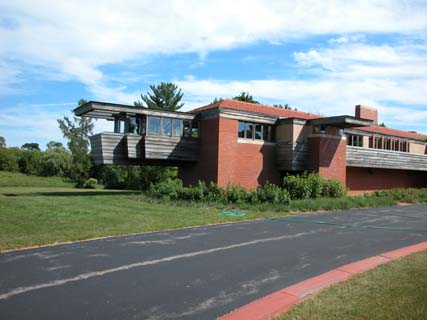 Another has an office space that is radically cantilevered off the end. 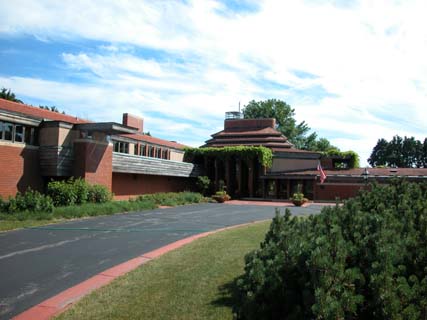 The main room has windows all around and above.  There is a tall masonry core that not only acts as a chimney for the large fireplaces, but also has a spiral staircase up the side with a glass lookout at the top.

Yes!  I finally found the box of photos containing those of Wingspread from April of 2000.  Though some of the photos didn’t turn out that well, I think it adds much more insight into the beauty of this home design. 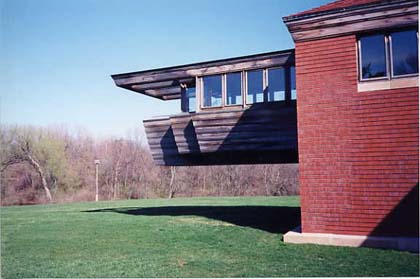 This shows how radically the small study is cantilevered. 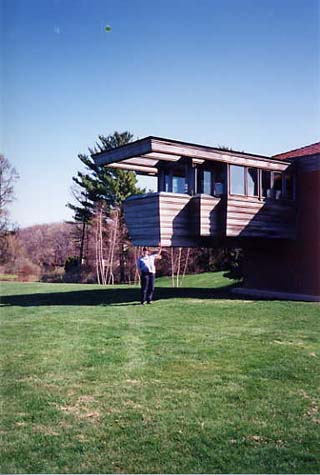 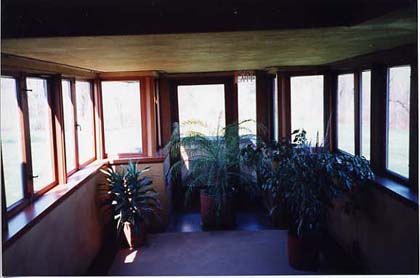 Inside the cantilevered study. 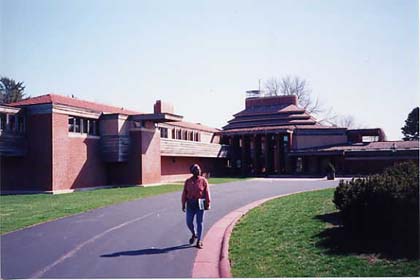 Lisa walking down the front drive. 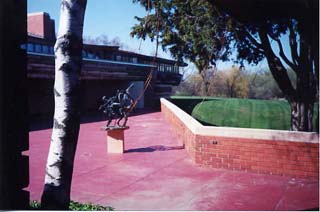 The most dramatic thing about Wingspread is the mail living area of the house.  The lighting makes the area very inviting.  The different uses of space are defined not by walls, but by the furniture, proximity to fireplaces, and what level they are on. 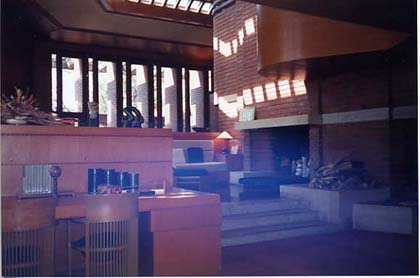 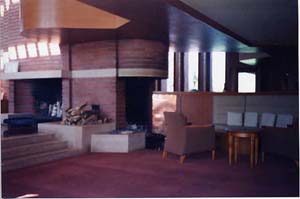 Wingspread has many hidden treasures.  Mr. Wright and Mr. Johnson shared a love of music.  Mr. Wright had a sound system installed in the main rooms of the house.  It was fed by this incredible 1930’s record player that was incorporated into the room dividers.  We were fortunate enough to have been there on a day when it was not crowded and we got a wonderful tour by the woman in charge.  I think the tattoo also helped. 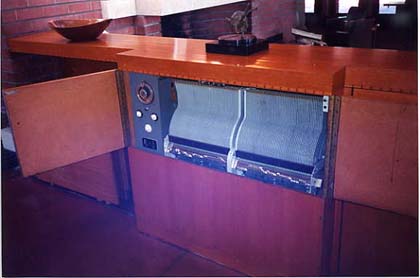 One of the hidden treasures of Wingspread. 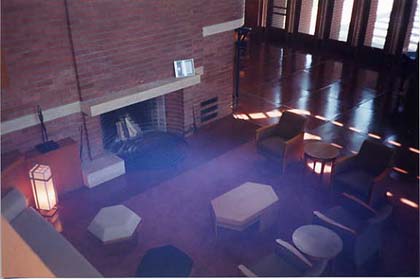 Entryway and living room from above. 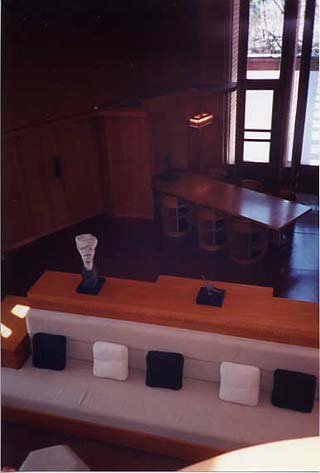 Dining room from above 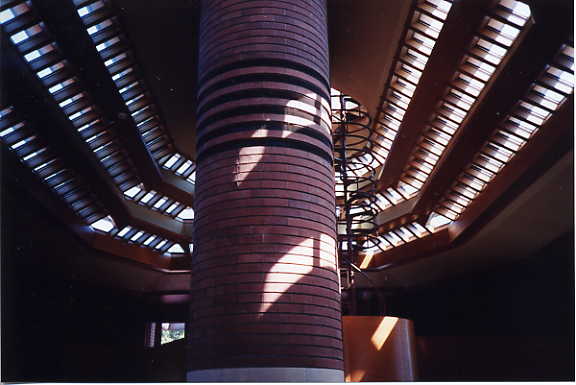 The lighting is what makes this house. 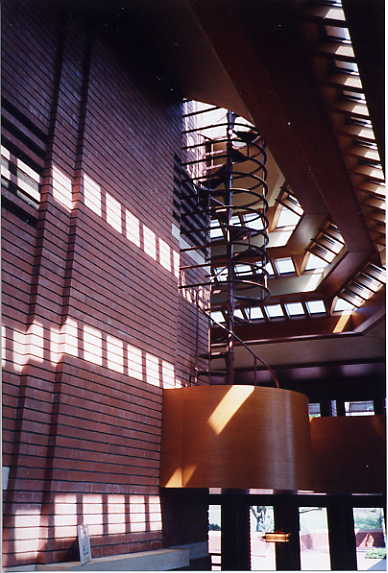 The Spiral stairway to the lookout. 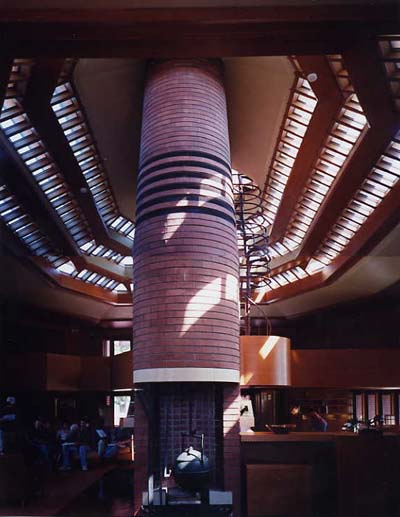 The fireplaces in Wingspread were interesting.  Many of them were relatively conventional for Frank Lloyd Wright designs.  Some of them were designed to be an upright fire place, meaning that 6 foot logs would be leaned upright against the back of the fireplace in order to build the fire.  This didn’t work out too well in practice as the smoke tended to miss the flu and fill the living space.  It looks great though as long as you don’t actually light the fire. 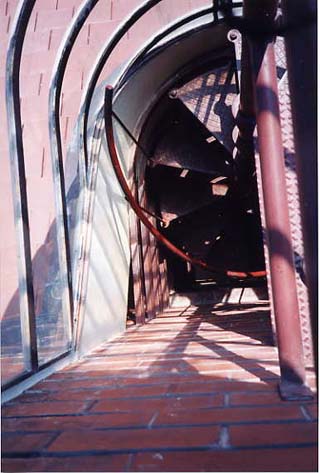 Looking down the spiral stairway. 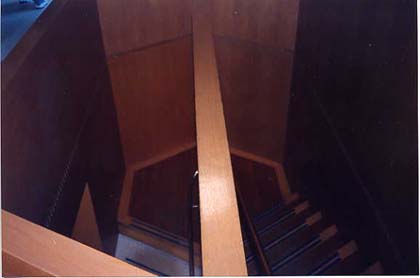 Looking down the hexagonal stairway.

Above you can see two different kinds of stairways that Wright used in the home.  The spiral stairway gives a great, complex vertical line to the aesthetic of the living room. Though probably not that useful, it is a beautiful addition.

The hexagonal stairway off the side of the living room is a fantastic design that is a bit more subtle.  The angle of the stairs really add to the hexagonal shape of the landing.