Iveadmired Edgar Tafel since I read his book about his years at the TaliesinFellowship, Apprentice to Genius.  Heworked with Wright at possibly the most exciting time of his career. Tafel was involved in the design and building of Fallingwater and theJohnson Wax building two of my favorite Wright buildings.  describes the Johnson Wax building like this:

Beethovens 9thsymphony is a culmination of all his 9 symphonies.  And its the strongest and the best coordinated and ofcourse he brings in the chorus at the same time to make it a final thing. Ive often thought that the Johnson Was building was Wrights 9thsymphony. 

Built in the mid 1930s, the SC Johnson Wax administrativebuilding is one of the most beautiful Wright buildings I’ve had the privilege oftouring.  When the research tower was added years later, the building wasmade even more impressive. 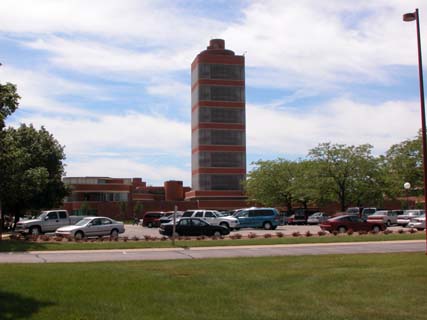 Unfortunately, due to the events of September 11th, 2001,photography is no longer permitted inside the Johnson Wax building.  I’llhave to go through my archives and find some old photos from our last trip andscan them for this page.  Until then, Please enjoy the photos I was able totake.

The Golden Rondell theater was originally designed and built forthe New York World Fair. It originally had a huge canopy structure over the topof it.  It was one of the biggest attractions of the World Fair. 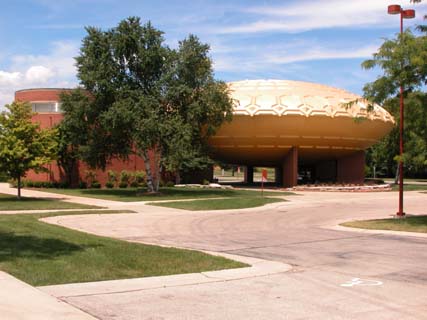 Atthe end of the fair, the main saucer section was returned to Wisconsin, whereMr. Wright built the current structure to give the structure a home.  Asyou can see, it makes for a very prominent landmark and an easy way to identifythe location of the Johnson Wax building to the uninitiated. 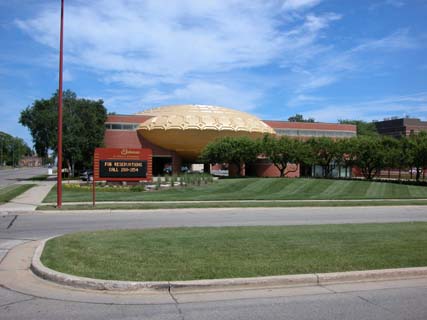 One of the things we love most about visiting the Johnson Waxbuilding is the company’s emphasis on family.  Not only is it a familyowned and run business for more than 100 years,  but the ideals of familyare supported by the company and its policies.  The administrative buildingfits into that perfectly. 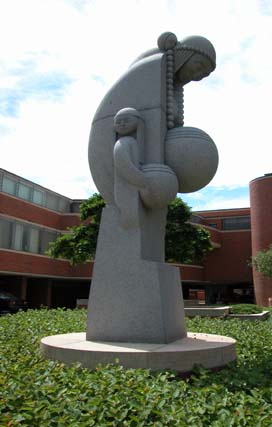 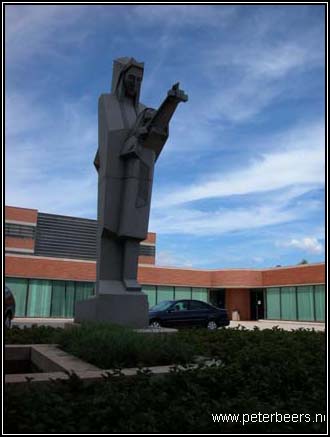 As you enter the courtyard area, two largestatues welcome you… one male and the other female (with kids in tow). This is an artistic representation of family, as well as being the only Wrightstatues that my friend Lisa likes. :) 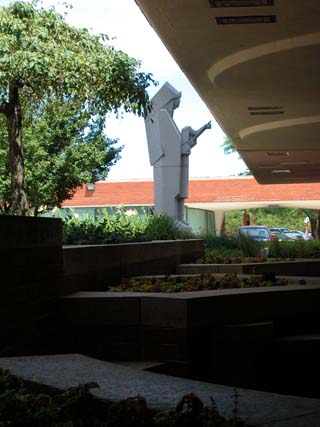 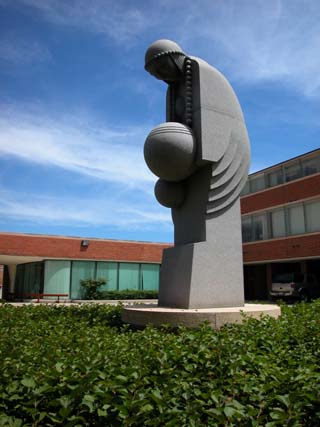 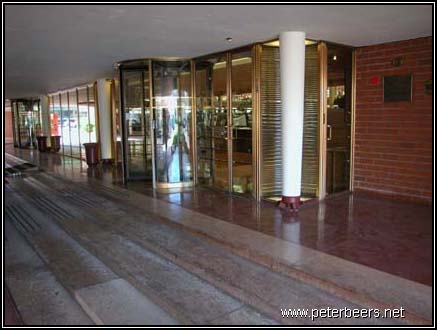 The entryway to the building consists of a beautiful set ofbrass lined windows and doors, including 3 large revolving doors. 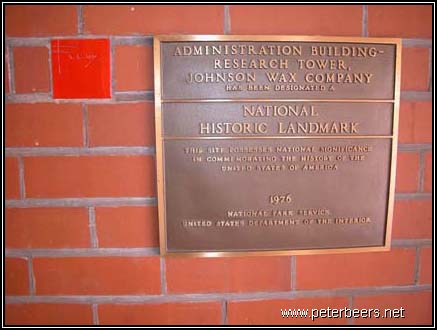 The building has one of Wright’s signature tiles next to themain entrance.

Someone walking into the building is compressed in a somewhatdark and low-ceilinged parking area before they enter into the building and arereleased into a large open entryway with plants hanging over thebalconies.  The effect is amazing.

The ceiling and roof are supported by these large “lilypad” columns that start at a slender 9″ at the bottom, and reach 18feet in diameter at the top.  There are 77 of them that hold the buildingup.  The famous story about them was that the original building committeewouldn’t grant Wright a permit to build the structure because they didn’t thinkthe columns could support the weight.  They determined that each columnmust support 12 tons in order to safely support the building.  Wright wasdisgusted by their lack of confidence and foresight and decided that a publicdemonstration was called for.  He constructed one of the columns and theninvited the entire building committee along with the press to witness thedemonstration of strength.  He even hired an orchestra to play while thedemonstration went on.  His plan was to pile at least 12 tons of weight onthe column and continue adding weight until the column collapsed.  Hislittle demonstration payed off.  The column was able to support more than60 tons of sand before it finally collapsed…. more than 5 times the weightthat it was required to.  Needless to say he got the building permit.

The visible evidence of this support is in the way the walls areconstructed.  There is a large gap between the top of the brick walls andthe lower edge of the roof/ceiling.  This gap is filled with clear pyrextubes that allow natural light in.  Much of the roof, in fact, is made ofthese clear tubes that are sealed together.  Though the lighting affect wasbeautiful, the ceiling tended to leak and the building got a bit too bright inthe summer… necessitating use of better sealants and some shades to protectfrom the sunlight.  The visual effect is though you’re standing in aforest.  It is beautiful.

Wright designed all the furniture for the building too. The desks were extremely functional to the point where they’re still usedtoday.  They incorporate build-in file cabinets and trash cans that attachto the legs so they can easily be vacuumed under.  He originally designed a3 legged chair that helped promote good posture.  When employees complainedthat the chairs tipped easily, Wright replied that people would learn not toreach too far after falling a time or two.  Herb Johnson wasn’t toothrilled with this answer.  During a meeting with Wright, he asked Mr.Wright to hand him a book that was just out of his reach.  Wright leanedand tumbled out of the chair.  In a very dignified manner he picked himselfup, dusted off and then said that he’d have to do something about the design ofthe chair.  He came up with a 4 legged chair that is still in use by someemployees and in the visitor’s center.

Many years later, the research tower was added to thedesign.  Unfortunately it does not meet current fire codes and cannot evenbe worked in, much less toured.  It is one of the tallest buildings inexistence that uses Wright’s cantilever principle in its design. 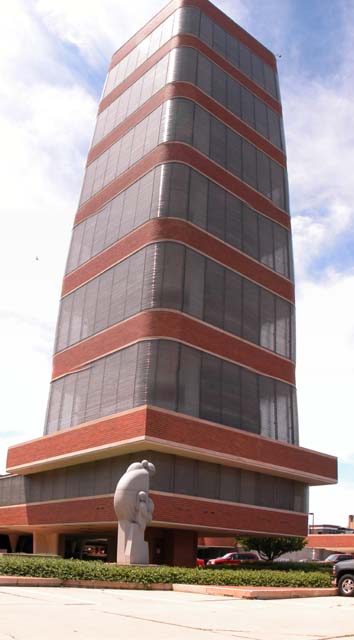 You can see a car and the garage under the tower.  COOL!

By looking at the tower, you can see that the central core ofthe building is what provides the support.  As you look around the tower,it is easy to see that the glass around each floor prevents the walls fromproviding any structural support to the outside of the building.  Inaddition to that, the central core is the only part of the lower building thattouches the ground.  It is actually kind of disconcerting to walk under thethe tower as you enter because it looks like it should not be standing due toits lack of support.

As a side note, this is another tour that was assisted by mytattoo.  Even though I called weeks ahead, we could not get a reservationfor the 1 day that we were visiting.  We showed up anyways on the hopesthat someone would cancel.  The woman was just about to tell us that therewas no way she could fit us in when she noticed my tattoo.  She told meafter the tour that had been the reason why she let us all go through.

Two lessons to be learned… 1)  Plan your trip to JohnsonWax well in advance.  They only give tours on Fridays!!!  and 2) If you’ve got ink, SHOW IT!!!!

Praise be to he on high forthe pre-911 photos that I found! 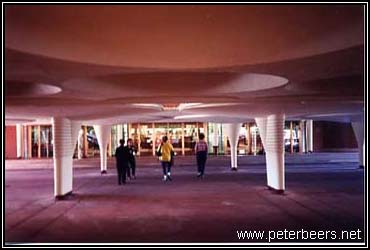 The entry into the Johnson Wax building is donethrough this low garage.  I’m claustrophobic and this kind of botheredme… especially on the parts where you’re walking under the research tower. 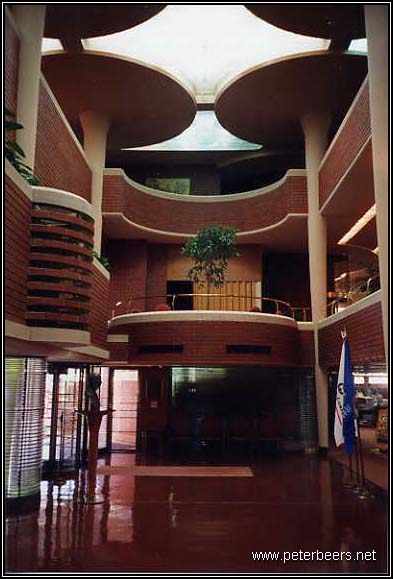 The “lily pad” columns really make for abreath taking entry.  You can see all the way to the skylight ceiling.

TheArchitect Philip Johnson had some wonderful quotes about Wright in Ken Burnsdocumentary.  Some of the best arewhen he was talking about the Johnson Wax building a building, which he listsas the finest room in the United States today.

I dont think heever mentioned light to me in all the conversations we had. He talked about how proud he was of the structure of the concrete lilypads (the structural members that hold up the ceiling in the Johnson Waxbuilding).  Oh thats nothing  Anyone can build a concrete thing you just call somebody on thetelephone, come quick and make me a lily pad! But the genius was in how he knew it would make the light, and how heknew the lily pad was the perfect shape. 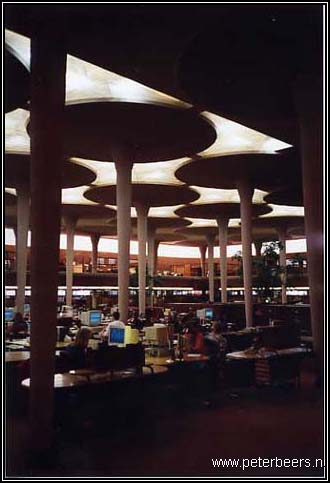 Walkingfrom the entry to the main work space 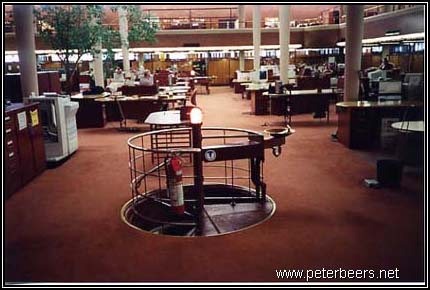 SpiralStaircase leading to the basement. 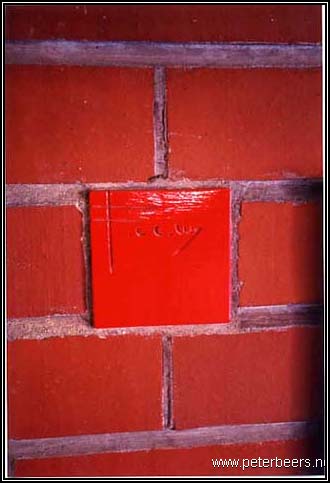