My road trips sometimes take on a life of their own. I hadn’t planned on stopping to see the Kinney House on this trip, but I had time, a full tank of gas, no money for a hotel, and I only had to go about 60 miles out of my way. To me that makes an opportunity. 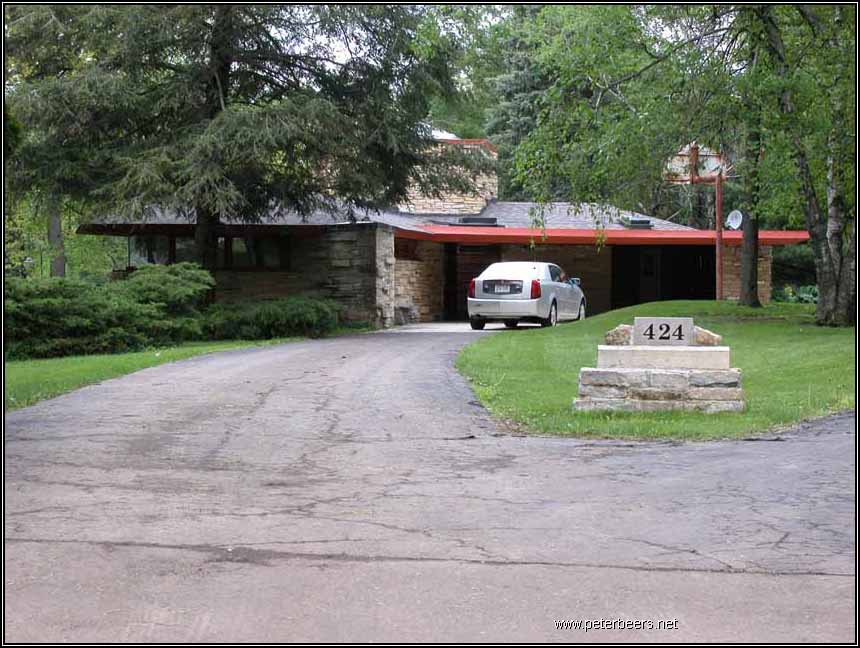 The only view of the Kinney House from the street

Storrer tries to give a little background on the clients that hire Mr. Wright to build their homes. He states that as a college student, Margaret Kinney worked for Mr. Wright’s sister, Jane Porter. That explains one of the reasons why Frank Lloyd Wright was selected as the architect for the Kinney’s home.

The town of Lancaster, Wisconsin is quite small, but it is starting to grow. I drove through the town a few times since I had only a street address, and no real directions to the Kinney House. I saw some homes that had been around for many years and I thoroughly got lost in a newer subdivision that looked like it had been built in the last 15 years. The homes were large and the community seemed to be upper middle class.

Storrer goes on to describe how Mr. Kinney acted as his own contractor and he dealt with all of the tradesmen himself. Kinney quarried his own stone for the house and brought it to the work site each morning in his old pickup truck. You can see the way the limestone masonry was done in an uneven pattern, with some stones sticking out from the face of the wall. This was specified by Wright.

The main core of the house is a large hexagon, with a bedroom wing built off one side, and an additional wing added off to the other side by Taliesin Architect John Howe in 1964. The home is built on a parallelogram grid.

I got an e-mail on January 1, 2005 from one of the folks that I’ve met through the web site regarding the Kinney house. He had some great information for me that I hadn’t found before. He mentioned that the Kinney house is one of the few Wright homes that is still lived in by the original owner. Mr. Kinney’s daughter is a scientist who was consulted when the Hubbel Space telescope when it needed repaired. The Kinney’s have entertained for people from NASA on many occasions.