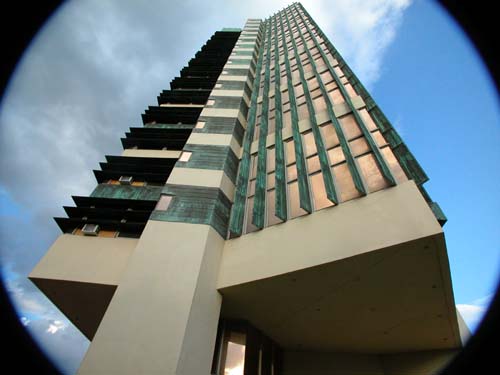 October 2002: The drama of getting there:

Bartlesville, Oklahoma is a small oil town that has a veryinteresting variety of architecture.  I was actually surprised at how largethe town is and how beautiful it was.  It was like an oasis in the middleof Oklahoma farm land.   I really enjoyed the afternoon I spentthere.

The hard part was getting there.  Its not hard to find, butI got sidetracked on my way between St. Louis and Oklahoma.  I saw an RVpulled off the side of Interstate 44 with a flat tire.  The two occupantswere standing at the front with their hands on their hips staring at it. It was like they were trying to psychically repair the tire and rim.  I hadto stop.

Stan and Edna are an older couple from Florida on their annualtrip around the country in the largest RV I’ve ever seen.  This was theirfirst flat.  AAA said they’d be right over in about 4 hours.  Theyobviously didn’t want to wait.  I pulled up and offered some help. They eagerly accepted.

Edna went inside to cook dinner, while I looked at the pile oftools that Stan had pulled out of the lower storage compartment.  I grabbedthe lug wrench and tried with all my might to loosen one of the 12 lugs. No luck.  I needed to get more leverage.  Neither Stan nor I hadanything handy to work as an extension.  I finally looked at the bike rackon top of my car and had an idea.

It took me over an hour to take the bikes off the roof anddismantle the rack enough to use the cross bar for more leverage.  Thatfinally worked.  I got all 12 lugs loose.

From that point, it took moments for Stan to use the hydraulicjacks to lift the whole RV off its wheels and change the tire.  They wereon their way in 3 hours.  And after a nice dinner, I was late for my tourof Price Tower.  Oh well.  I’ll catch it next time. 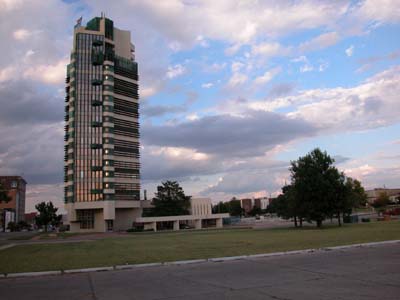 Price Tower from across the parking lot.

Price Tower was built in 1956 for Harold C. Price Sr.  Thedesign and construction process took 4 years to complete.  This was thefirst of three Wright buildings to be commissioned by the Price family.  Ifyou look in the Arizona section of this web site, you can see some lovely photosof Mr. Price’s retirement home in Phoenix (Actually you can see some lovelypictures of the wall surrounding the Price house in Phoenix.  I think Mr.Price valued his privacy). 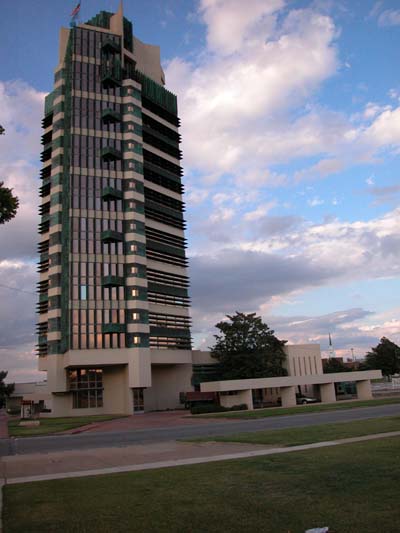 Price Tower from the street.

Price Tower was built as an apartment building.  Itsconstruction is mostly poured, steel reinforced concrete.  Each of thefloors are cantilevered.  There are copper shutters and accents all overthe building which not only protect the rooms from the hot Oklahoma sun, butalso add a wonderful green patina to the building. 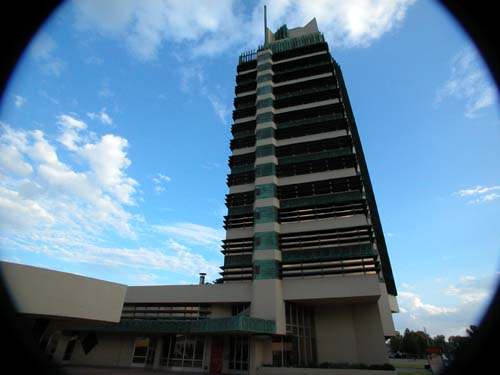 The tower is now used as the home of the Bartlesville ArtCenter.  The have tours of the building at 11am and 2pm Tuesday throughSaturday and 2pm on Sundays.  You can get information at their website.  The people were very nice in trying to accommodate me and answerall of my questions.  I was pretty upset that I wasn’t able to make it tomy tour on time. 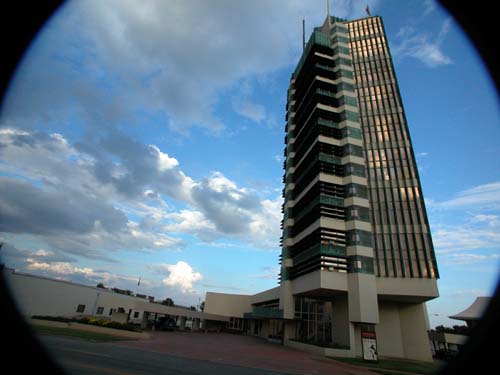 Getting the whole picture, fish-eye style

According to the Price Tower web site, Wright first met HaroldPrice in the early 1920s.  Price started out as a welder with his own smallshop.  As Bartlesville grew as an oil town, so his business grew to be oneof the largest pipeline construction companies in the country. 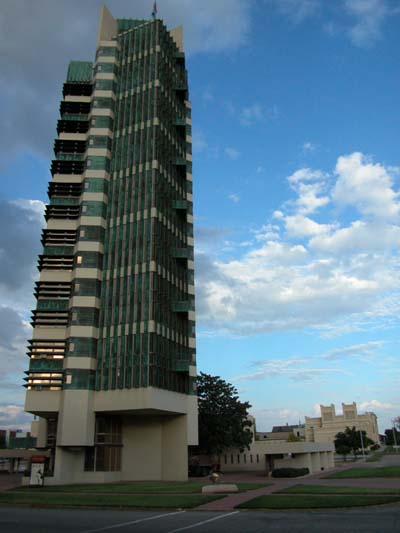 Photo from across the street.

Harold Price, Jr. commissioned a Wright home to be built inBartlesville while the tower was being constructed.  It is a privateresidence and for once, I respected the owners privacy by not photographing it. 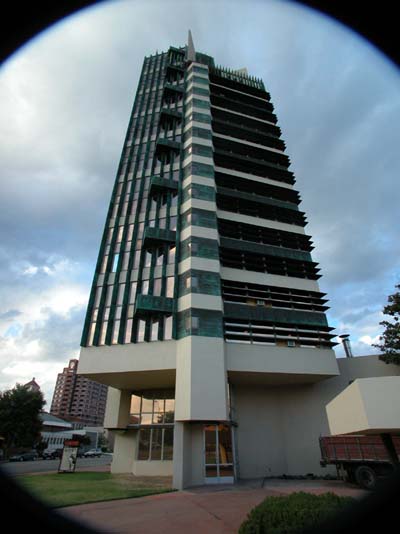 South side with the fish-eye

This view shows off the cantilevered floors.  The centralcore of the building is what gives it support.  For that reason, the toweris able to have the second floor overhang significantly.  It is a quitestriking visual affect that reminds me a lot of the S.C. Johnson Wax ResearchTower. 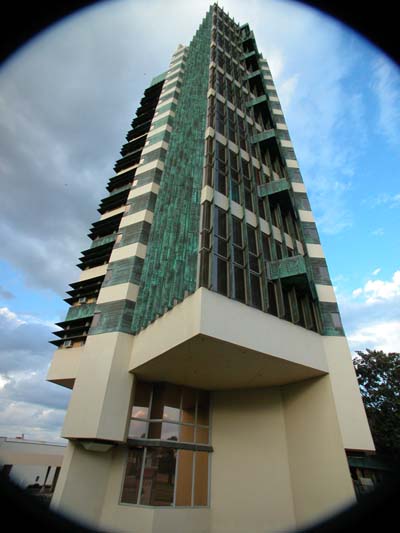 West side with the fish-eye

Though the external design work is quite different from theJohnson Wax Research Tower, the building design is quite similar.  Theoutside walls of glass are not load-bearing.   They merely keep thewind out. 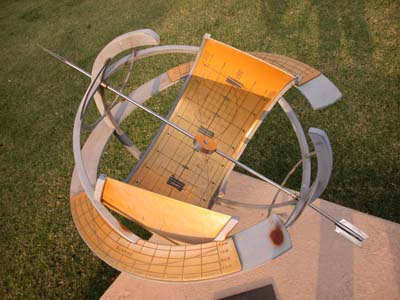 Sun dial at the corner.

This complex sun dial not only tells time, but also tracks thecalendar.  It is quite an amazing piece of art work as well as a functionaltimepiece.  Unfortunately it was a bit too cloudy to really get a goodreading on things.  It didn’t help that it was pretty late in the dayeither. 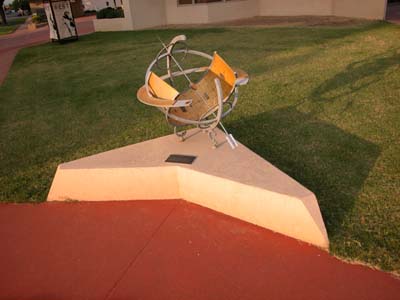 Smaller view of the sun dial. 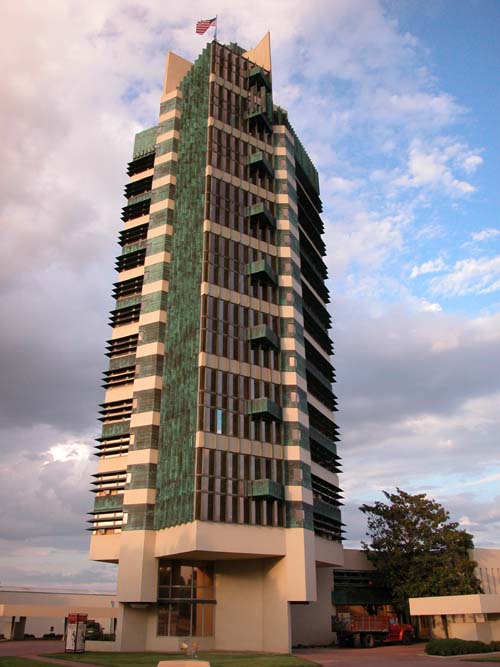 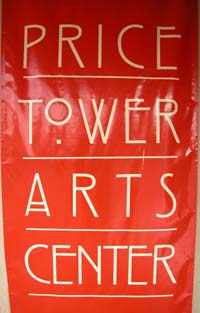 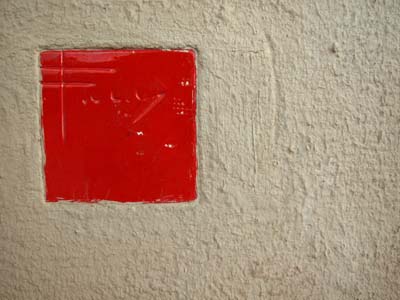 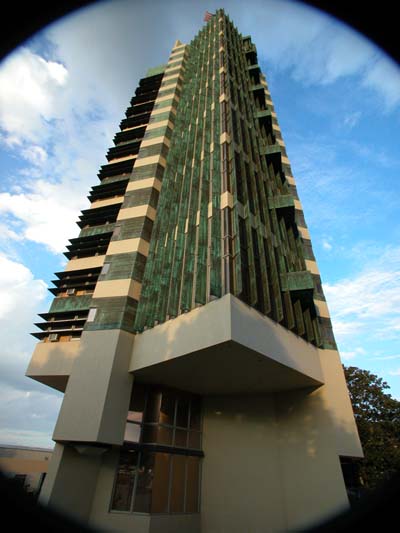 Copper panels above the door.

The green patina of the copper really adds color and distinctionto the building.  The weathering looks completely different in thisclose-up of the panels above the entry than it does when you look at thebuilding from a distance.  The color really fits well with the “amberwaves of grain” atmosphere that surrounds Bartlesville. 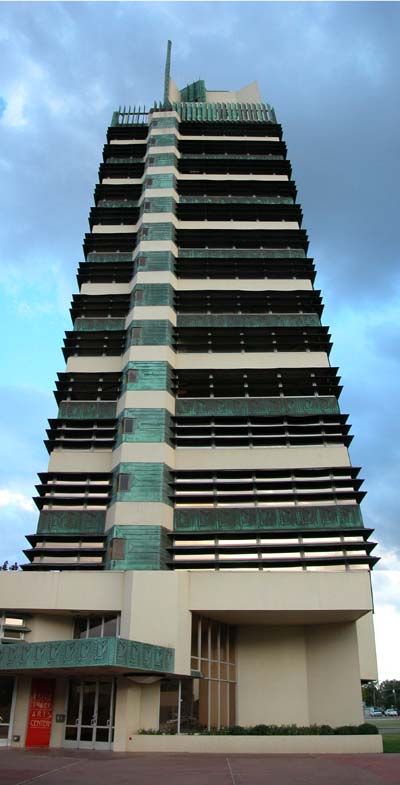 Stitched photo of North side. 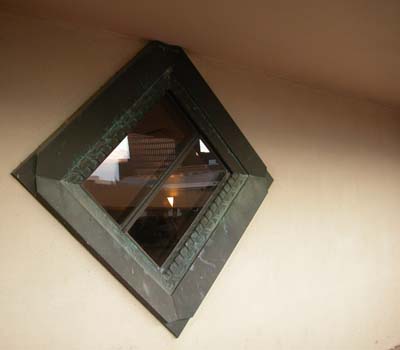 Window under the north awning.

Taken out of context, this window looks totally out ofplace.  When you take a step back and look at the court yard and car portsin their entirety, it looks right at home. 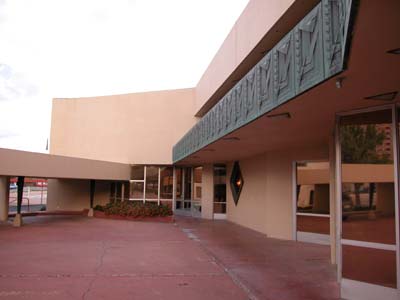 There are car ports on either side of the building for theoccupants to store their DeSotos.  Each is supported by a rather thinlooking, copper covered support.  Most of the car port roof iscantilevered. 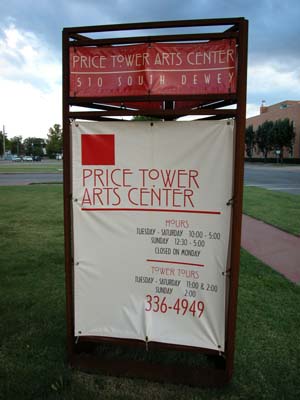 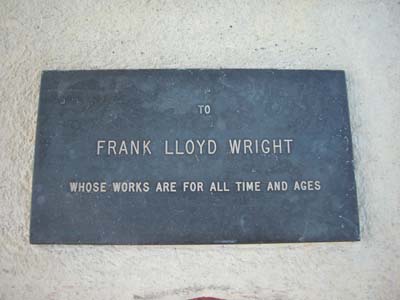 Plaque below the sun dial. 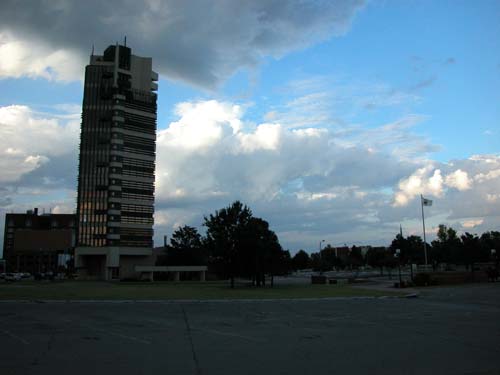 Twilight with a storm brewing. 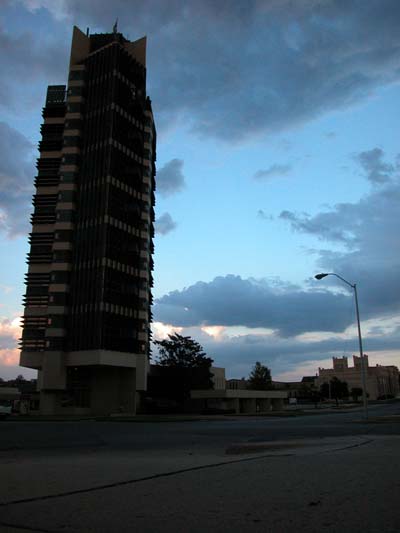 Across the parking lot from Price Tower is a Wrightesquebuilding that is home to the Bartlesville Community Center.  It has a 1700seat auditorium for all kinds of performing arts.  They have regularperformances of ballet, theatre and classical music.

The Community Center was designed by Wesley Peters, one ofWright’s apprentices, in 1979 and built under the supervision of the Frank LloydWright Architects from Taliesin West.  It was originally designed as thefirst of a three phase project that also included an exhibition hall andhotel.  It was being financed by the Phillips Petroleum Company.  Theearly ’80s were not kind to the oil business in Oklahoma and the second twophases were never built. 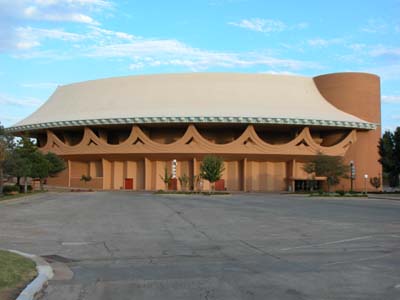 The building was completed in 1982 and opened that year with aperformance by Kitty Wells.  The acoustics of the auditorium are amazingand make it a very attractive venue for artists to perform. It is the home ofthe annual Oklahoma Mozart festival. 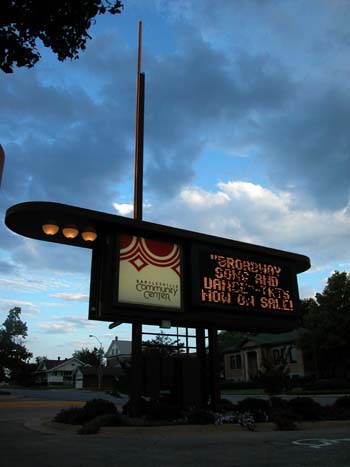 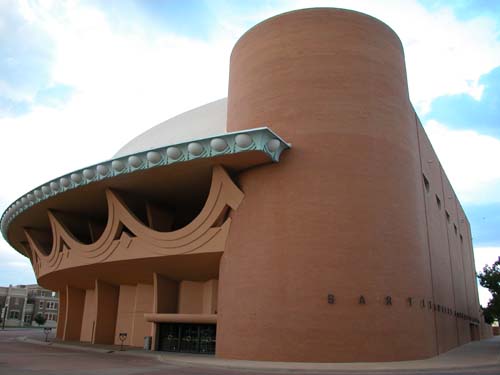 Side view of the Community Center

The lines and design are an interesting mix between Wright’s CorbinEducation Building and the GradyGammage Memorial Auditorium. 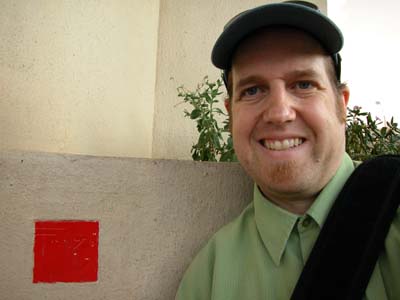