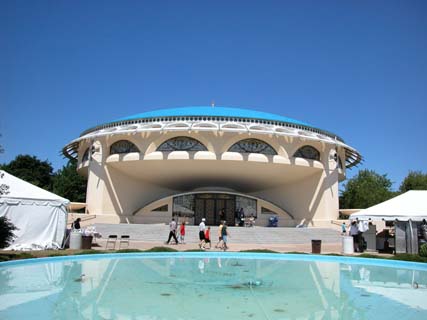 This is certainly one of the most dramatic Wright buildings in existence. When talking with one of the docents on the tour, she wondered why it didn’tshow up in more Wright publications.  I didn’t have an answer for her onthat, but I know that on the three main publications that it is a part of, iteither has a HUGE central pictorial and description, or its on the cover. This is a building that deserves to be on the cover!!! 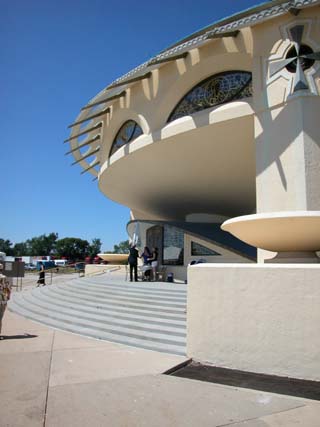 We visited the church on one of the few days each year when itis open to the public.  You’ll notice in many of the photos that the churchis surrounded by tents and rides and most of all, people!!!  It was theannual Greek festival and it was quite a spectacle.  The main source for alot of the information we got was the wonderful talks that were given during thetour of the church.  We found ourselves going through the tour again andagain to hear a different talk by a different person.  We really enjoyedthe hospitality and inspiration that each of these people shared.  THANKYOU! 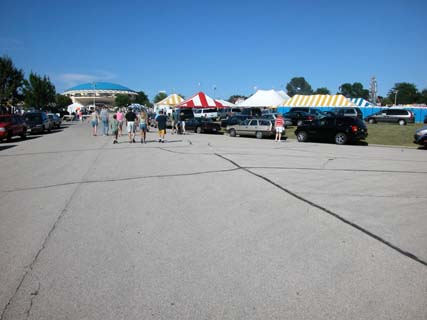 The Greek Festival surrounded the church with tents andcarnival rides.

Originally designed not long before Wright’s death in 1959, themain construction was completed in 1961.  Later additions included the artglass Icon windows, as well as some repairs and revisions along the way.

As the story goes, it was not an easy time getting people toagree on Wright as the architect.  It seemed that each group in thebuilding committee had their own choice for an appropriate architect.  Whenthey finally agreed on Wright and notified him of this agreement, the waitingbegan.  They waited and waited for a design… most on the committeegrowing increasingly more anxious about the wisdom of selecting Wright. One day, Wright had one of his apprentices bring him some fresh paper andpencils and he sat down and wrote up the design, in its entirety,  in asingle morning.

Wright had to do some research over this time to understand thenature of Byzantine architecture so that his creation would fit in well with thefaith and beliefs of the congregation.  Byzantine architecture is primarilyhorizontal and uses domes and features in an odd number… usually 3.  TheOrthodox cross is an equilateral cross that usually appears within acircle.  This theme of a cross within a circle appears throughout thedesign of the church. 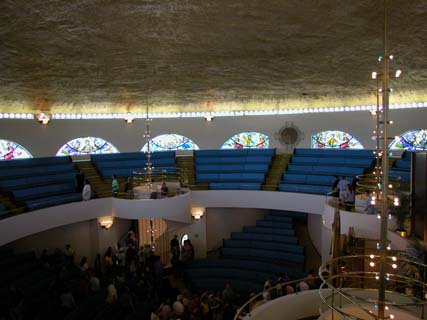 The layout of the pews and altar are in the shape of a cross,with the dome of the church providing the circle.  On the lower level youcan see one of the points of the cross ahead and another to the left.

The brass work that sets off the altar and holds the paintedicons is all made up of stylized crosses within circles. 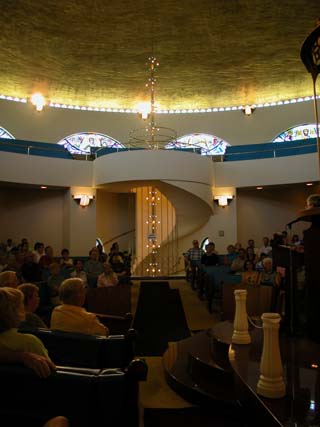 Even the lights around the outside of the sanctuary, when putone on top of another, make up a cross within a circle.  There’s one lighton either side of the spiral stairway.

Air conditioning vents are hidden within this design.

Looking up the center of the spiral staircases reveals a cross within acircle.  The list goes on and on.

Spiral staircases add a lot to the decor. 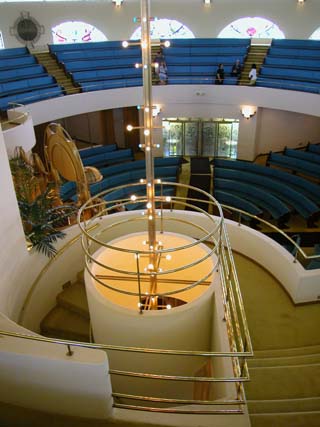 The spiral staircases each surrounded a light spire. 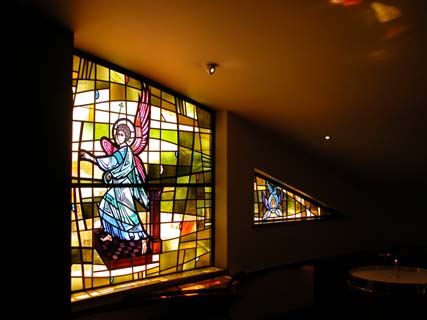 The other side of the front door.

Stained glass icons in the top floor of the sanctuary.

After the extended wait for the design, the building committeewas certainly a bit shocked at the drawings that finally arrived.  Wrightcertainly had his work cut out for him when it came time to sell thedesign.  As the story goes, his most basic description of the churchinvolved a cup of tea.  He took the cup, placed the saucer upside down ontop of the cup, held it up and said, “This is your church.” 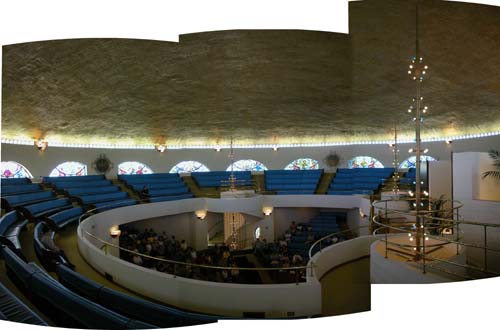 Stitched photo of the sanctuary

The most amazing thing about the construction of the church isthe dome.  As with any Wright building, light is very important. There needed to be a way to let natural light into the building in such a waythat it really brought out the beauty of the interior.  If you look atphotographs of the inside of the dome, you’ll notice that it is completelybounded by these small portal windows.  That means that the entire weightof this 104′ dome is held up by the small spaces between these windows.  Inaddition to this, it had to be done in such a way that the structure couldhandle the seasonal forces that cause expansion and compression with theconstant freezing and warming.  Though there were some problems with theinitial implementation of the design, the principles behind its structuralintegrity held true.  The dome is quite secure with what appears to be aminimum of support. 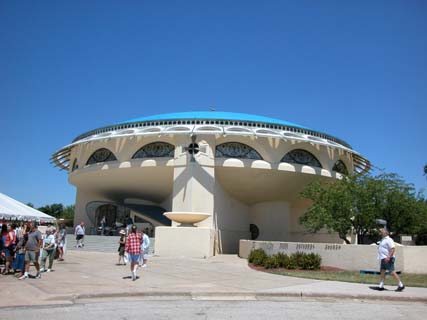 Anotherview of the outside.  Notice the Orthodox Cross at the top of each verticalmember. 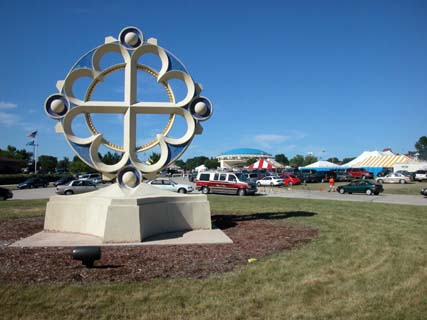 Stylized Orthodox Cross at the entry of the Annunciation GreekOrthodox Church.