Bloomfield Hills, Michigan is a suburb of Detroit.  Thishome is placed in a beautiful wooded area on a lake.  All of the homessurrounding it are large, “beautiful” homes that don’t really matchthis 1949 Usonian.  Even though some of them are old, the Melvyn MaxwellSmith house is definitely the most beautiful home around.

There are quite a few modern sculptures around the yard that addto the artistic impression of the house.  The L-shaped home has a mixtureof banded and floor-to-ceiling windows that face the lake.  A wall addsprivacy to that side of the house. 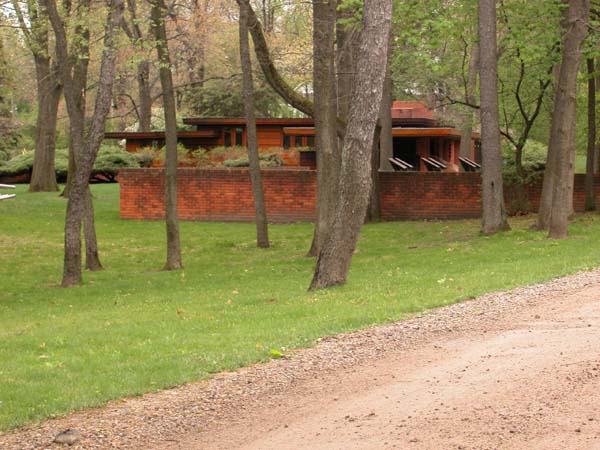 Wall setting off the private side of the house.

According to Storrer,Mr. Smith first saw photos of Taliesin in 1938.  He read all of the booksabout Wright that were contained in the Detroit Public Library and particularlywas interested in the issue of Architectural Forum that was devoted to Mr.Wright.  Mr. Smith returned from WWII and found this plot of land nearDetroit for a very reasonable price.  Mr. Wright approved of the site andwork began on the plans.  Mr. Smith and his wife were both teachers. The plans that arrived proposed a home that was priced well beyond what theycould afford.  In answer to this, Mr. Smith immersed himself in learningthe building techniques required to be his own contractor.  Storrer tellsthe tale of how Mr. Smith managed to acquire tidewater cypress for the home whennone was available… and at a very reasonable price. 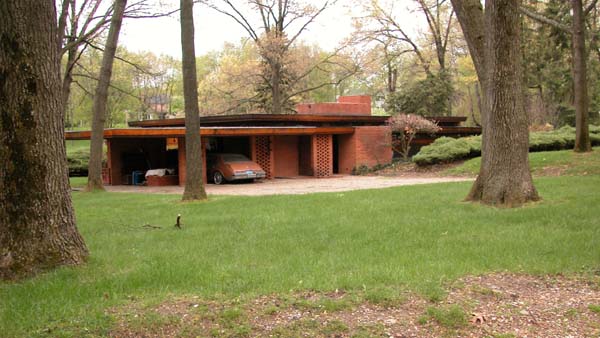 Carport side from the road.

Thomas Heinz explains in his book “The Vision of FrankLloyd Wright” the reasons why this home remains one of the most beautifulof Wright’s Usonian designs.  This zoning laws in this region originallyrequired that each house must be placed on a lot no smaller than 3 acres. The zoning laws for this neighborhood have not been changed since itsconstruction in 1949.  So where-as the 2 Jacobs’ homes are now surroundedby homes, the Robie House has an apartment building built 6 feet from its backwall and the Pope/Leighey house had to be moved 20 miles to the south to makeroom for a highway, the Melvyn Maxwell Smith house remains wonderfully uncrowdedon its large, lake-side lot.  In fact the road to get to this house isstill dirt. 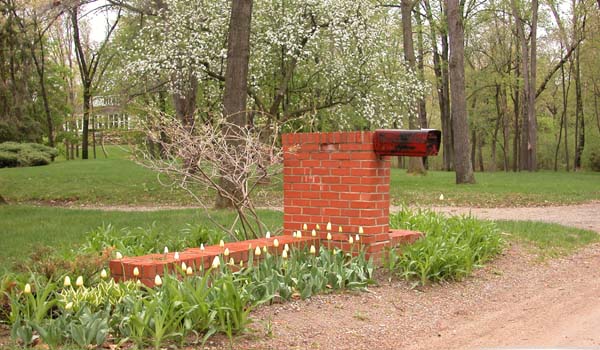 Storrer identifies the Melvin Maxwell Smith house as one of thelast board and baton “sandwich” design homes.  The masonrypillars offer the structure that holds the cantilevered roof while the walls aremade of sandwiched cypress wood and are not load bearing.  Later Usonianswere predominantly built with brick and the sandwich walls were used forinternal walls.  With the winters in this part of the country, that seemsto make sense.

I’d read on the internet that the Melvyn Maxwell Smith house wasowned by a university that did tours.  I even got this phone number where Icould call for a tour.  No-one ever answered my messages though. Early this October (2003) I found out why.  A really great woman sent me ane-mail telling me that the home is actually owned by her Aunt’s best friend andsaid she’d send me the info so I could take a tour the next time I’m in thearea.  Thanks Liz!  you’re the greatest!!!!

I’ve had many e-mail conversations with people about he MelvynMaxwell Smith house.  Some have speculated that Mrs. Smith has passed away.From what I have learned, she’s alive and well and living in California (as ofApril, 2004). Her family is working on creating a trust that will maintain thehouse over the years. The Cranbrook Institute has sponsored tours of the homeon a few occasions. Unfortunately I haven’t been on one yet. Hopefully I’ll managethat soon.

What I can say is that I’ve been in contact with a woman fromSterling Heights, Michigan who has stopped by and taken a bunch of photos of thehome since it is not being lived in at the moment.  The following photosare thanks to Victoria Mielke.  Thanks so much for sending them!!! 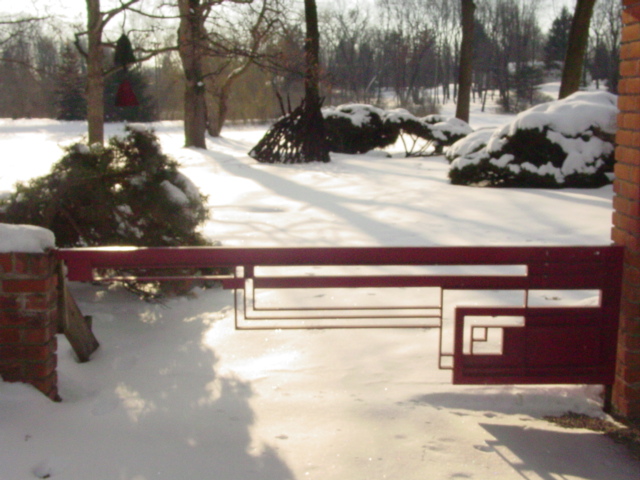 Gate across the driveway.  It looks a lot like otherCherokee red gates that Wright has used in his buildings. 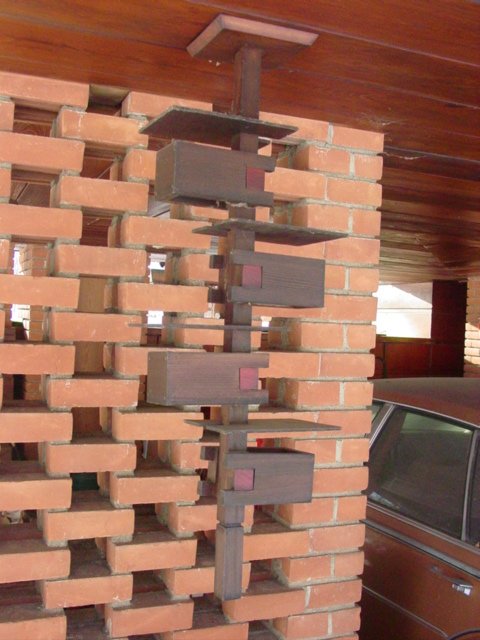 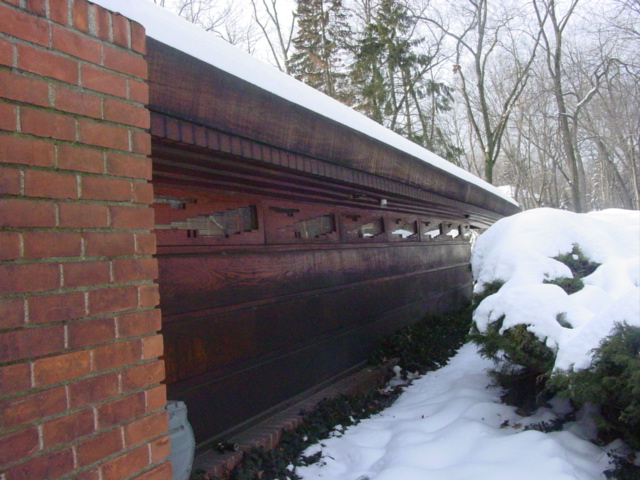 Street side of the house… notice the clerestory windowdesigns. 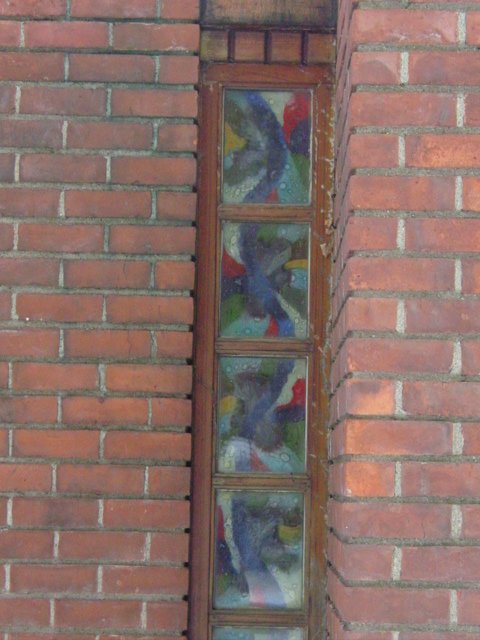 Ceramic tiles on the side of the house 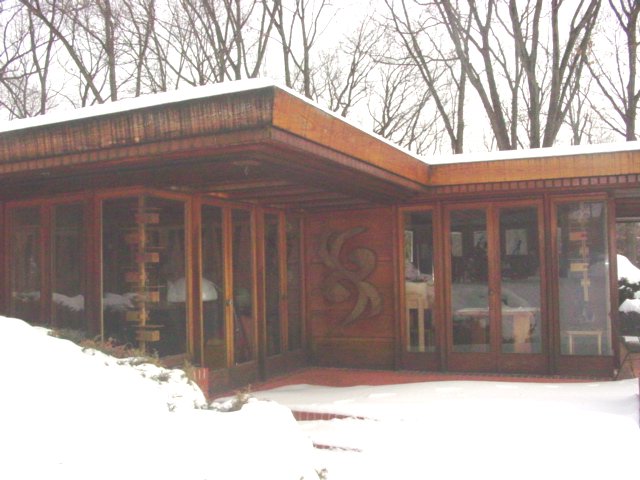 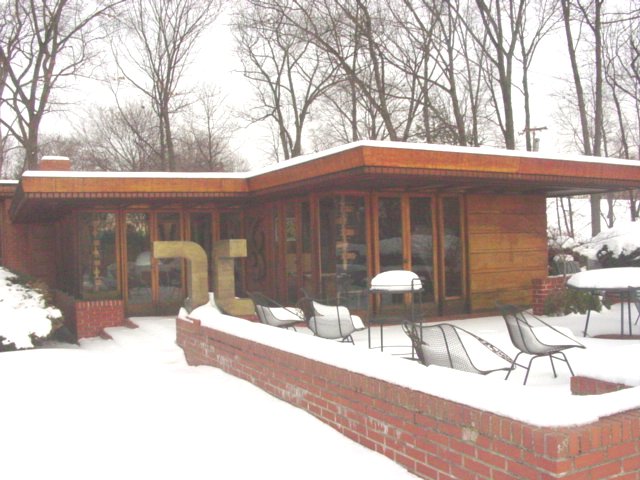 Rear of the home… facing the lake.