Alright, alright alright.  I’ve heard it enough times frompeople.  What kind of Wright fanatic can I be if I haven’t evenphotographed a Wright home that is 16 miles from my house?  I thought I’dgo about fixing that problem.  I had a few hours to myself on Sunday, so Ithought I’d see what kind of photos I could get since there weren’t any peskyleaves to obstruct my view. 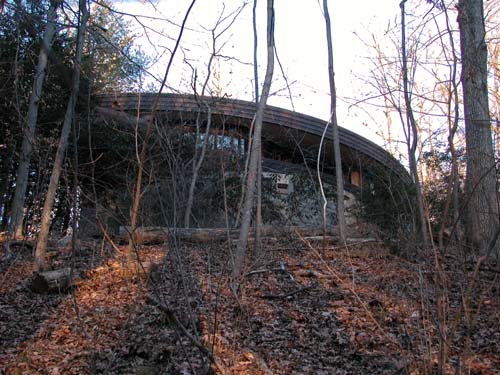 As close as I dared go.  I believe I’m still on parkproperty for this photo

This beautiful home was built in 1953 in Bethesda, Maryland, adiverse suburb to the Northwest of Washington, DC. I call it diverse because inplaces it is densely populated and very urban and in others it is almost rural,with thick woods and lots of space between houses.  The latter describesthe neighborhood where the Llewellyn Wright house is located.

Robert Llewellyn Wright is the sixth child of Frank Lloyd Wrightfrom his first marriage.  According to William Allin Storrer’s book”The Frank Lloyd Wright Companion”, Llewellyn had admired many of hisfather’s more impressive designs, yet when it came to building his own home,budget and space requirements dictated a Usonian, Solar Hemicycledesign.

Also according to Storrer, Wright (the elder) wanted to locatethe home in Northern Virginia, along the Potomac River.  He coveted thesite owned by Louis Marden, for whom he was designing a home for at the sametime he was designing his son’s. Mr. Wright could not convince Marden to give uphis lot, so Llewellyn’s home was built in in Bethesda.  The two homes arevery similar in design, and both fit their respective lots perfectly. 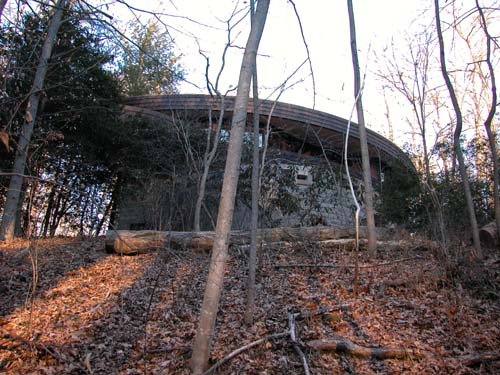 Looking up at the Llewellyn Wright home from the park below

As a side note, I’ve tried to visit the Marden house on manyoccasions.  The owner has changed the street address to the home and it isin an area that is difficult to see from the car.  I need to go over onbicycle in hopes of being able to see the home without trespassing.

Southeast side just above the first floor terrace.

Llewellyn Wright’s Solar Hemicycle is a little different fromothers that I’ve seen (Jacobs II and Boulter). Instead of the house being placed into a hill, with the windward side almost buriedto the roof line,  this home has 2 stories above ground all the way aroundthe house and a dramatic balcony on the park side of the home. 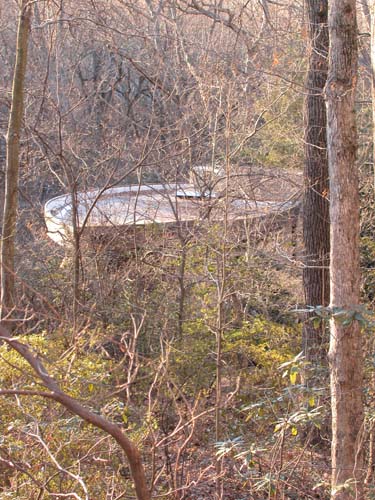 Football shape is sort-of visible from above.

Instead of being crescent shaped, or straight, the home isactually football-shaped.  The first floor has a large, semicircular patiowith a plunge pool at one side.  The second floor has a pie-shaped balconythat looks down into the woods.  This balcony is almost completelyconcealed by trees.  In fact the whole house is mostly concealed bytrees.  In any season but Winter, you’d never see the home.  In factI’d ridden past it on many occasions on my mountain bike and didn’t know it wasthere. 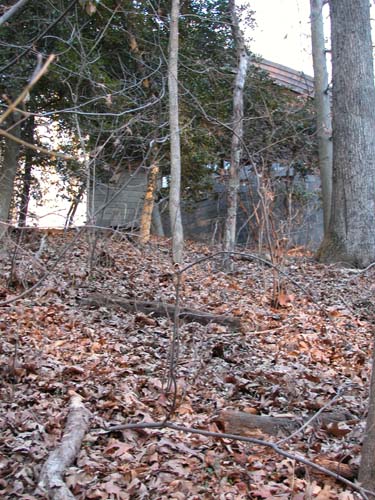 Southwest side of the house right below the balcony

The construction is concrete block with the upper floors coveredin wood.  The lines of the wood emphasize the horizontal line of the houseand add warmth to the gray of the concrete blocks. 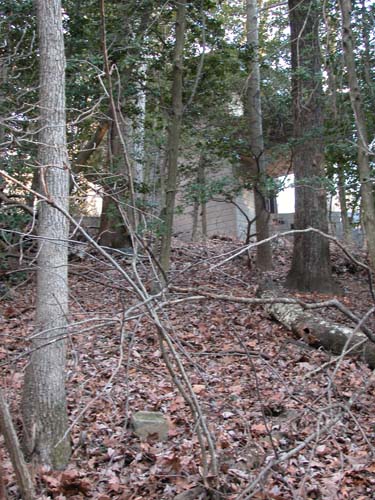 West side of the house. The balcony is barely visible to theright.

Unlike the other Hemicycles that I’ve seen, this home has twodistinct levels that don’t seem to overlap.  In both the Boulter and JacobsII houses, the first floor has the main living space and work spaces (kitchen,bathroom, storage) and the bedrooms and private baths are located on a balconythat overlooks the first floor.  This is not the case with the LlewellynWright house.  Because of its size (it seems quite small) there isn’t roomto have that overlooking balcony setup.

On the grounds below the house, there is a strange concrete formthat looks like it might be of Wright’s creation.  It looks as though itmight have been built in the early 1950s.  I have no idea what this wasoriginally, but it was kind of interesting to stumble across. 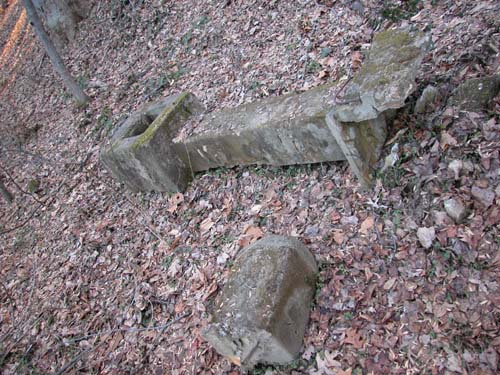 I’ll come back and visit the home in the Spring and see what itlooks like… if I can even see it. :)