Kentuck Knob is one of my favorite Frank Lloyd Wright homes.  Located about 15 miles from Fallingwater, it was built for the Hagan family (owners of the Hagan Ice Cream company) in the late 1950s.

According to Clinton Piper, researcher and writer for the Kentuck Knob web page, The Hagan House was one of the few Usonian homes that was created in a truly upscale manner.  It is made of native stone, tidewater cypress, and copper.  What is even more amazing is the wonderful condition that the home is in.  It is a definite testament to not only the construction, but also to the maintenance that has been done by the original owners and Lord Palumbo (the current owner).

One of the characteristics of Wright’s later works has been building on a grid system.  Wright would pick a geometric shape that is repeated over and over in the layout of the building, thus adding continuity to the design.  Piper explains that Kentuck Knob is built on a triangular grid, meaning that the individual unit of measure is an equilateral triangle measuring 4 1/2 feet on each side.

This pattern is replicated on a larger scale in the overall shape of the house.  If you looked at the home from above, drawing a line across the driveway and along the retaining wall, you’d see that it is in the shape of a hexagon. The hexagon is equilateral and made  up of 6 equilateral triangles fit together.  These hexagon/triangle patterns appear throughout the house. 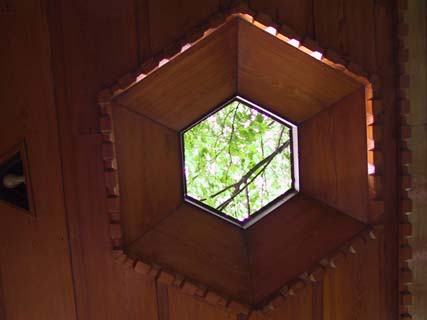 Hexagonal skylight next to triangular opening for the light fixture

The photo above is a good example of what I mean.  You can see that the framing around the hexagonal skylight is made up of triangles that are formed together.  The inside corners of each triangle are cut out to make the hexagonal hole that looks up into the trees.

The Hagan’s were introduced to Wright’s architecture through their business dealings with Edgar Kaufman, owner of Fallingwater.  According to Piper, they met when Kaufman wanted to enter a business deal with Hagan to bottle milk from a Pittsburgh farm coop.  The Hagans visited Fallingwater many times and soon became enamored with Wright’s work.

Fish-eye view of the sky lights from below the prow

One of the stories I love from the many tours I’ve had at Kentuck Knob relates to how Wright designed the home.  Wright sent his apprentices to the site to map it out so that he could design the home.  He came up with drawings for a wonderful home made of native stones and tidewater cypress.  Mr. Wright only visited the site after the home was nearing completion.  The Hagan’s asked for a few changes from Mr. Wright’s original design and he accommodated them by making changes that really added to the beauty of the home.

The amazing thing about this home is how the light permeates the living space. The morning sunshine lights up the entire home and afternoon sun filters subtly through the living room and bedrooms, showing off the beauty of the wood.  Wright did this with so many of his homes.  What is truly remarkable is that he was able to do this with Kentuck Knob, having only looked at the site map that was prepared by his apprentices.

I’ve visited the home a dozen times.  The most resent two visits are chronicled in the Winter and Summer photos that you see here: