The History of Frank Lloyd Wrights Darwin D. Martin house makes for one of the most interesting in architectural history.  The history of Mr. Martin, the man who commissioned the construction, is particularly fascinating.  His relationship with the architect, Frank Lloyd Wright and their life long friendship adds to this interesting story.  And events in the life of the house make for a tale of such proportions that youd never think it revolved around a house.  It is a shame to call this building just a house. It has often been referred to as an estate or compound.  That part of the story will come later.

The story starts many years before the commission of the house with the childhood of Darwin D. Martin and his brother William.  They were the product of an unhappy childhood and both ran off at ages 12 and 13 respectively to New York to make their way selling soap door to door for the Larkin Soap Company.  Darwin was particularly successful at this endeavor So successful, in fact, that he came to the attention of the President of the Larkin Soap Company who invited him to move to Buffalo and work at the companys headquarters.  This he did (at age 13) and he begun his road to becoming a self-made man.

By his mid 30s, he had worked his way up through the Larking Company, revolutionizing the way they kept their accounting and mailing list records.  By the early 1900s he was one of the wealthiest men in the country with a personal wealth estimated at over a million dollars.

This is the point in his life where he met Frank Lloyd Wright.  The two men had a lot in common.  Mr. Wright had begun to build his own architectural practice from the ground up in a similar way that Mr. Martin had helped the Larkin Company grow beyond what most people of the time thought was possible.

William Martin, knowing his brother Darwin was seeking an architect to build his new home, suggested that he consider choosing Wright to design the home.  William lived in Oak Park and was surrounded by the magnificent homes that Wright had designed in the area.  On a trip to Oak Park, they looked at and toured many Wright homes and even visited his studio, though Wright was not there at the time.  Eventually Darwin decided to commission Wright to design a modest home for him as a trial to see if the young architect was for real. 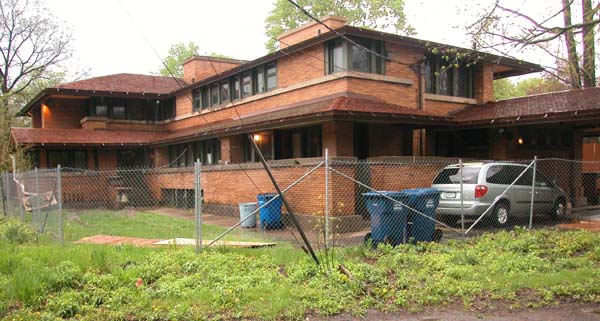 Behind the Martin House from the Apartment Building.  May, 2003

Wright started out by persuading Martin to purchase a large, corner lot for his home instead of the narrow lot that he already owned.  The first building that Wright designed and built was the Barton house in 1903 for Martins sister and brother-in-law.  Martin was ecstatic with the home and commissioned Wright to build his own home immediately.

Darwin Martin envisioned his grand home to be a way to gather his family together to heal the wounds of their troubled childhood.  He wanted to unite the family again under one roof in hopes of bringing happiness and peace where so little had been. Though this ideal never really came to fruition, the homes and buildings that resulted were some of Wrights most impressive work and have been celebrated as historical landmarks. 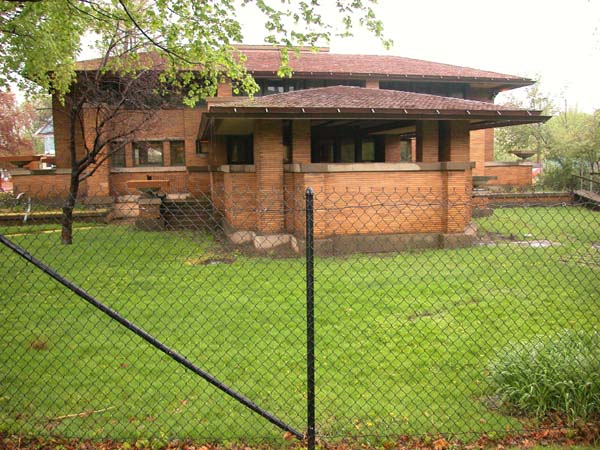 The main house contains 8 bedrooms, a spacious, flowing living room that connects to the dining room as well as an outside veranda.  It was spectacularly decorated with large central fireplaces, beautiful wood accents and dental molding, and a wonderful mural that surrounded the main fireplace.  The home was adorned with more than 360 art glass windows of 4 different designs and almost every room looked out onto the gardens and trees on the property.  Many skylights added to the bright and lively nature of the home. 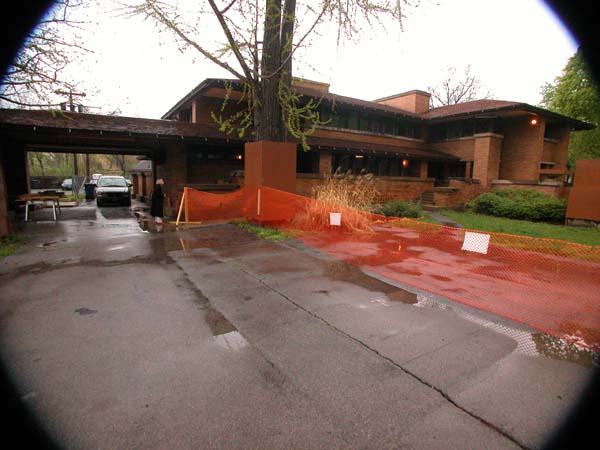 The main house is only part of the estate.  The carriage house has a stable and chauffeurs quarters along with it.  The gardeners cottage includes a greenhouse/conservatory to help with the upkeep of the gardens.  The gardens were spectacular.  Walkways and pergolas connected each of the buildings helping to connect all of the buildings with the gardens.  Particularly impressive was the walkway that connected the main house with the conservatory.  This gave a beautiful view from the entryway of the house, all the way down through the gardens to the conservatory where a large statue of Winged Victory became the focal point.  The home was visually stunning and perfectly integrated with the other buildings on the grounds. 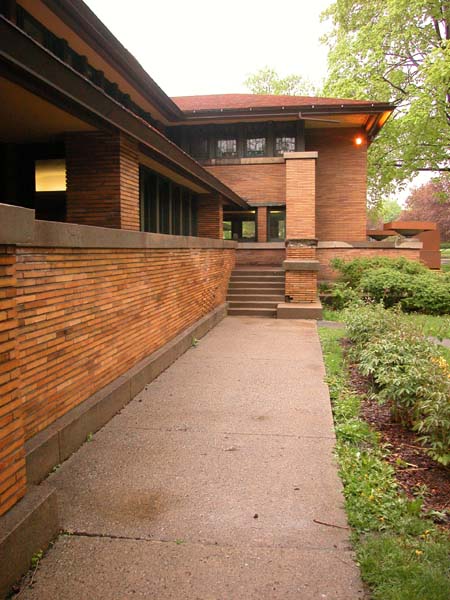 There were definitely some rough times ahead for the house and estate.  Darwin Martins health began to fail him in the late 20s and when he died in 1937, the house was too much for Mrs. Martin to keep up.  The depression had left the housing market in Buffalo flat and she was not able to sell the house.  She abandoned it in 1938.  There was talk of demolishing the whole complex in the 1940s, but somehow it managed to survive until 1955 when it was purchased by Sebastian Tauriello, an architect.

In order to maintain the house, Mr. Tauriello sold off the part of the land with the carriage house and gardeners cottage/greenhouse.  They were promptly demolished and replaced by 3 apartment buildings.  That pretty much broke up the estate. 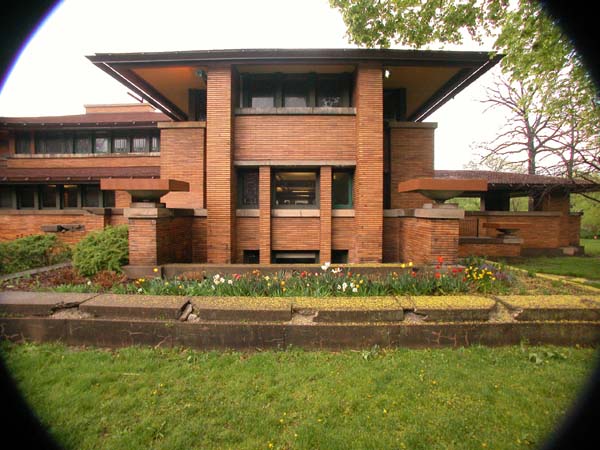 Fish Eye View of the Living Room and Master Suite Windows. May, 2003

Tauriello did a lot of good things for the main house.  He made many repairs and renovations to the house that needed to be done since it had been more or less abandoned for the previous 17 years. 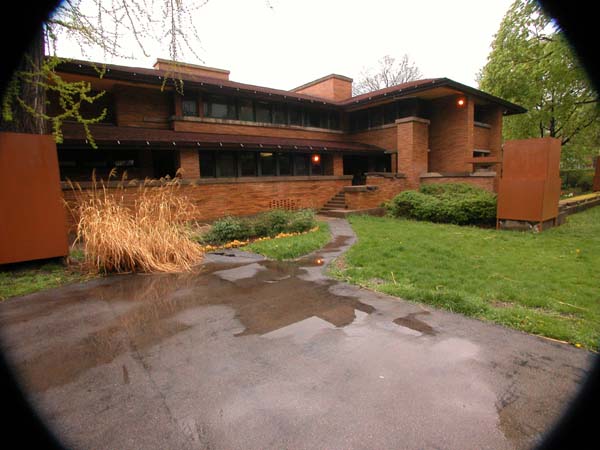 The 60s and 70s lead the house to become owned by the State University of New York.  It was used as the Presidents residence for a while and for special University functions after that.

The movement to renovate the home and make it a museum began in the 1990s.  With the help of people like Senator Moynihan and Robert G. Wilmers (President of M&T Bank) this movement has become a full restoration project.  The Barton House went up for sale and was purchased by the Martin House Restoration Corporation.  The apartment buildings went up for sale and were also purchased by MHRC.  That brought all the original land back into the hands of the restoration group. 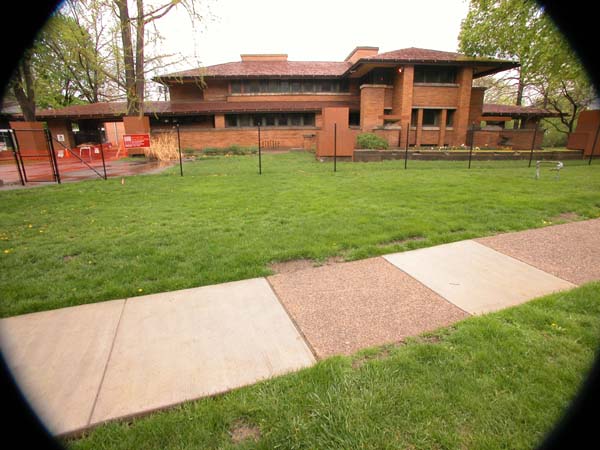 Recently two of the apartment buildings were torn down.  The MHRC is searching for someone to supply more than 400,000 roman bricks that match the rest of the house (not an easy task).  A design contest was held for the new visitor center.  Restoration work continues on the main house.  I read recently that theyve met their initial goal of raising the $23 Million to pay for the restoration and had started on the next goal of $5 Million for additional work.

The future looks good for the Darwin Martin House. 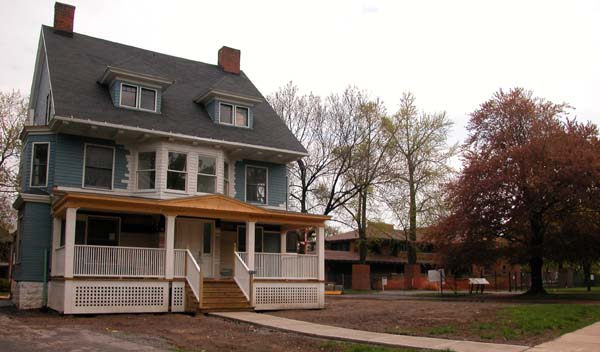 This Victorian is going to be the Volunteer Center. May, 2003 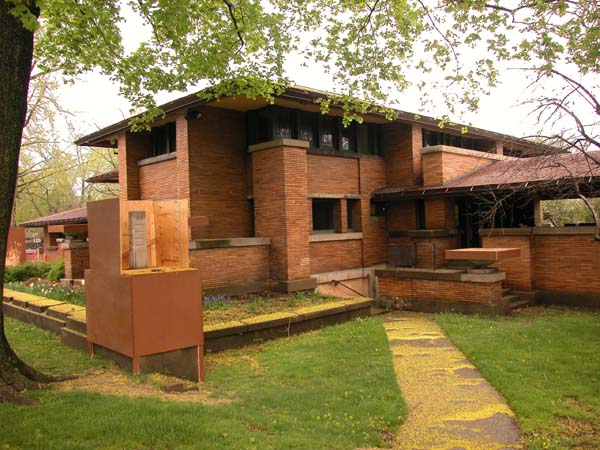 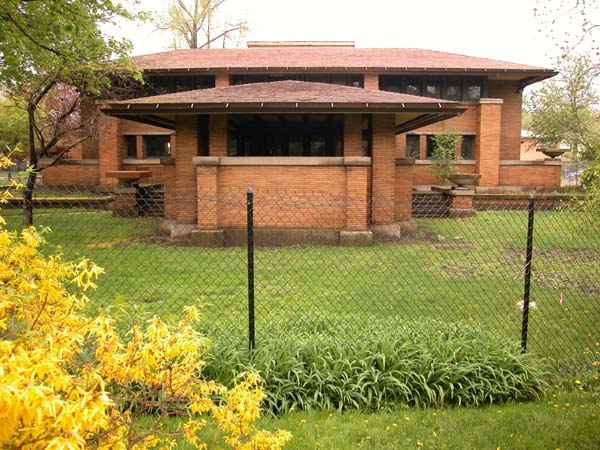 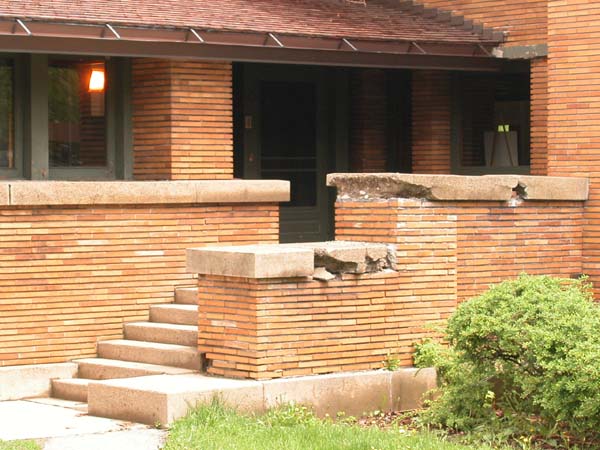 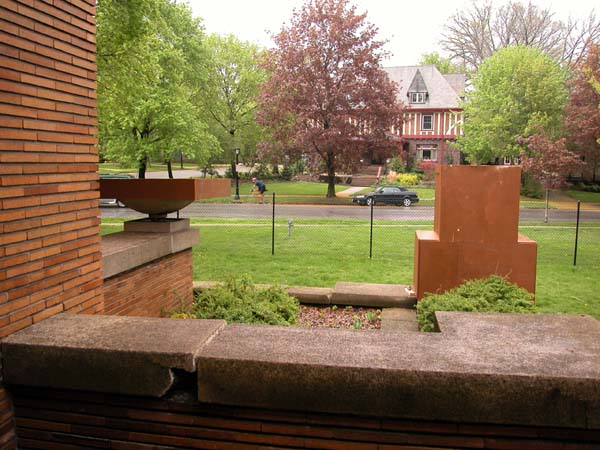 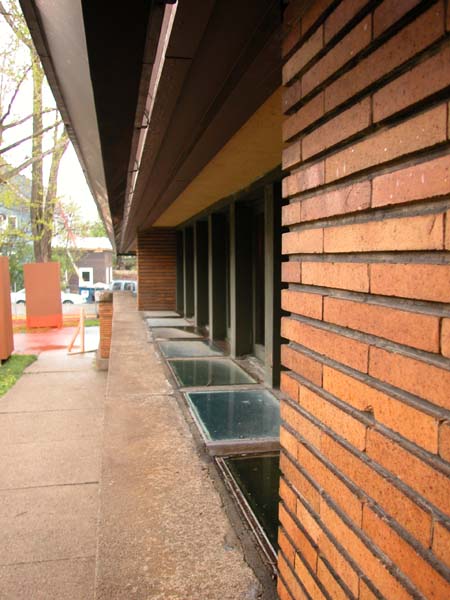 From the front door.  Skylights let light into the Billiard Room and Ball Room in the Basement.  May, 2003 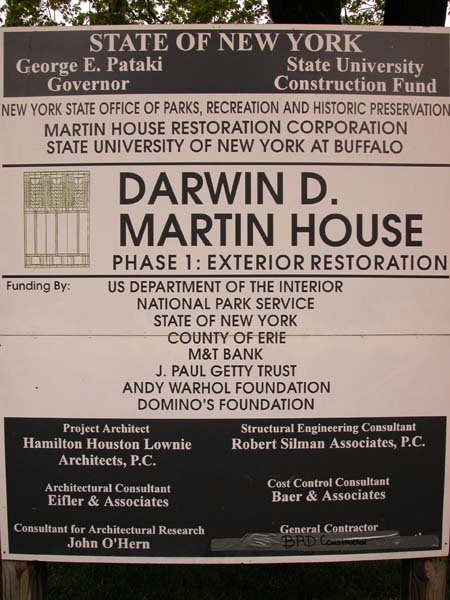 Update on the Renovations: August 2003.

A lot of changes have taken place since May.  The restoration folks have excavated around the whole house to inspect the foundation.  They are working on making sure that the foundation is strong and that the basement stays dry when the spring thaw and rains come. 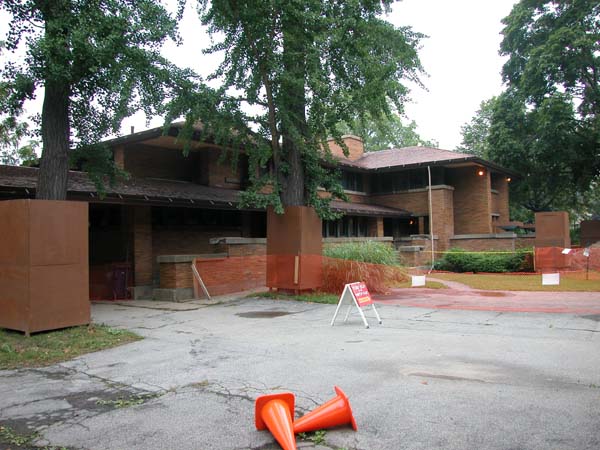 Darwin Martin house from the Apartment Driveway next door

One of the interesting things that I learned on this trip to the Darwin Martin house had to do with the bursar’s office that Martin had built to the front of his home.  Martin was a work-a-holic and he constantly brought his business home with him when his day at the office had finished.  He not only had an office specifically included in the house plan, but he went as far as to not include a door to the main house from his office.  To get to the office, you must go out the front door and over to a doorway in the porte cochere.  This allowed the people he worked with to meet him at his home office with no chance of disturbing the privacy and workings of the main house.  The office had its own skylight that is no longer part of the building.

When the home was abandoned in the 1930s, his large, oak, Wright-designed desk was burned in the fireplace as firewood.  The office was later used as a bedroom and kitchen for one of the tenants when the home was split up into apartments. 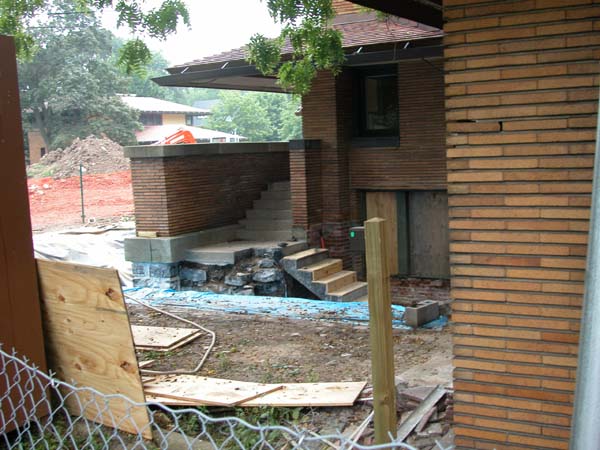 Excavation behind the porte cochere 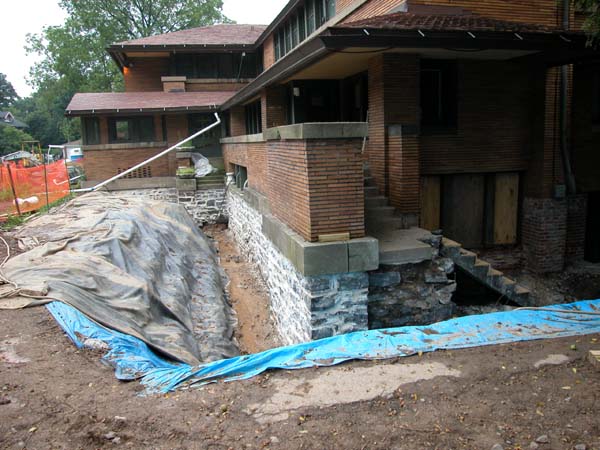 Excavation behind the house 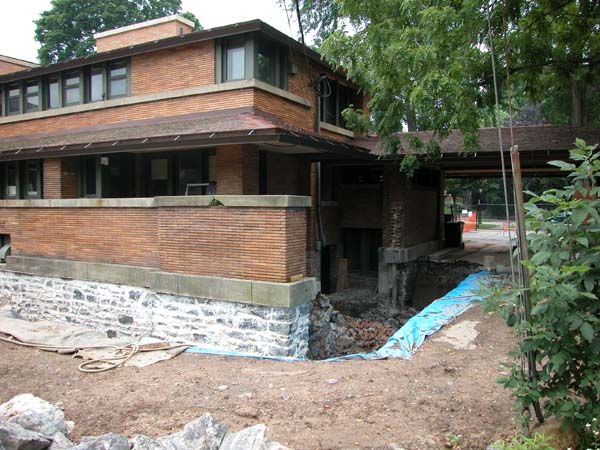 Foundation work behind the house 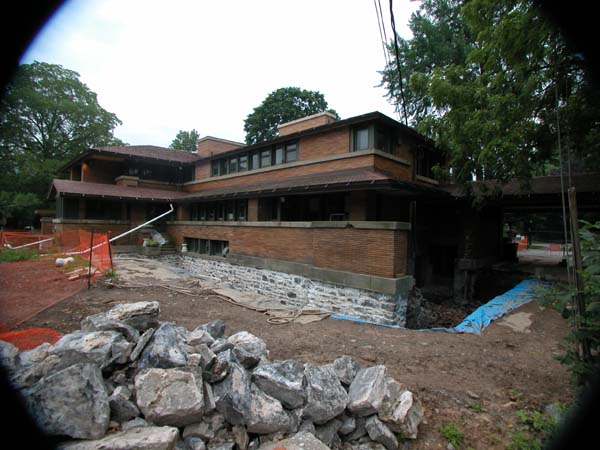 Fish eye view of the back of the house 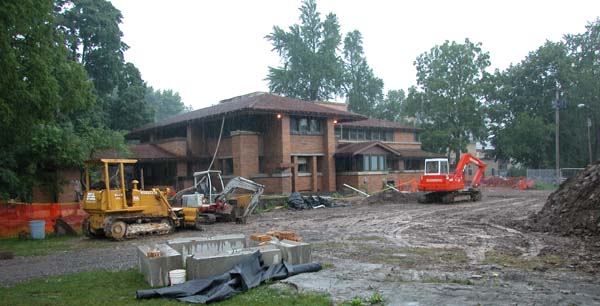 Back yard from the Barton House Veranda 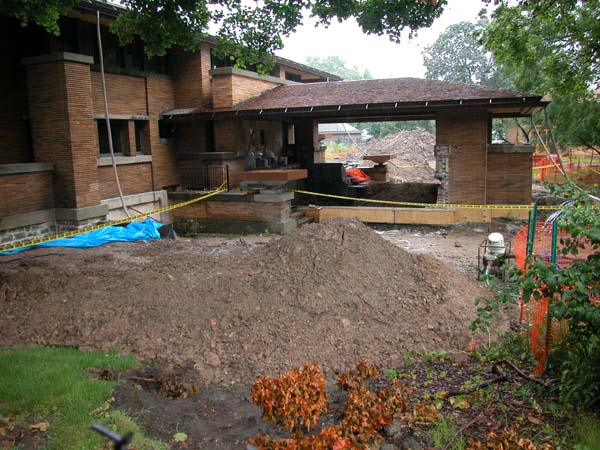 The Veranda is mostly dismantled. 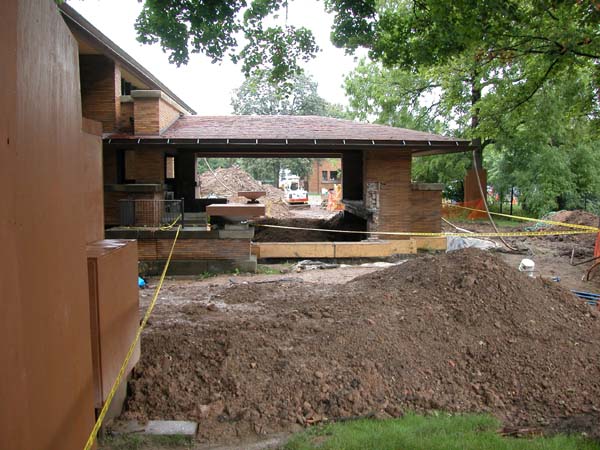 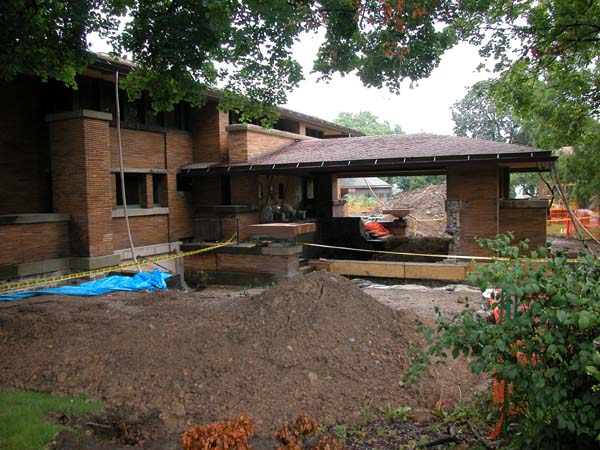 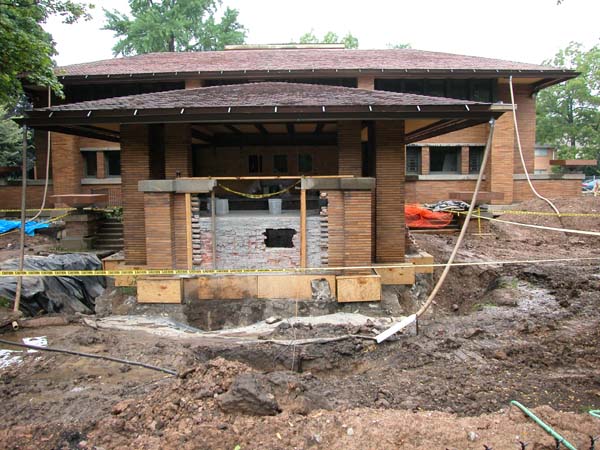 Better view of the dismantled veranda 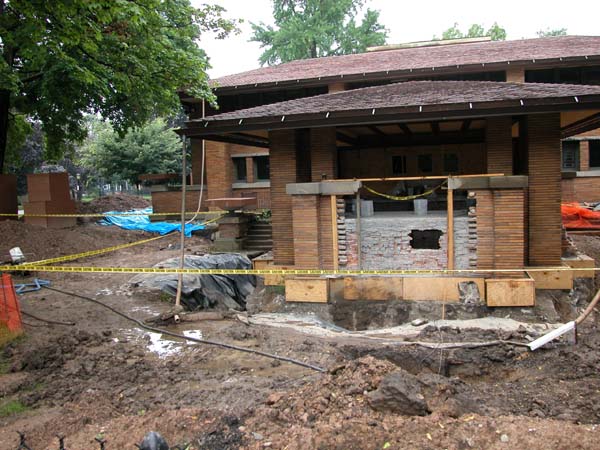 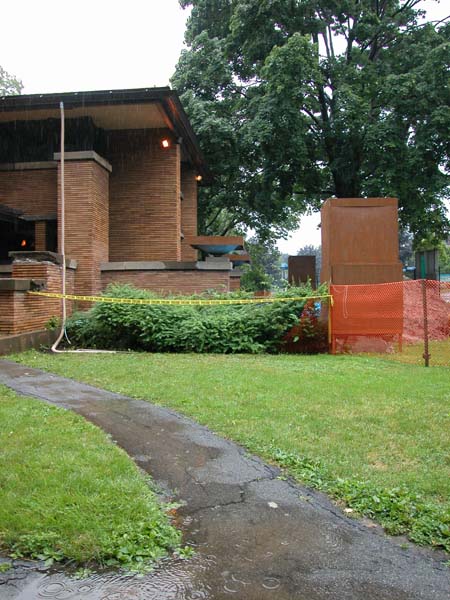 Entry walk to the Martin House 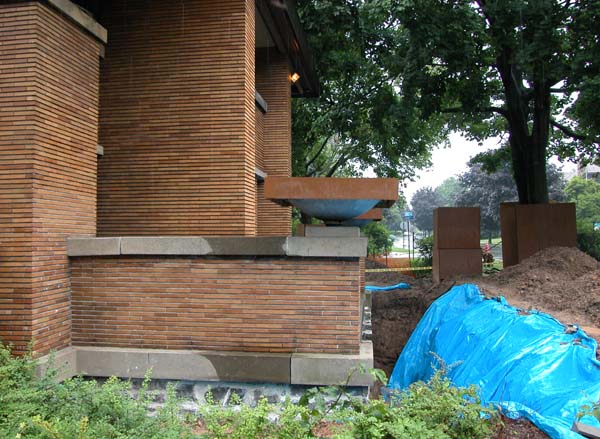 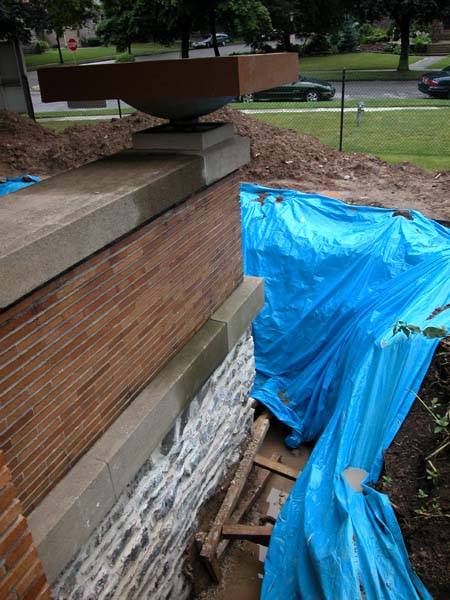 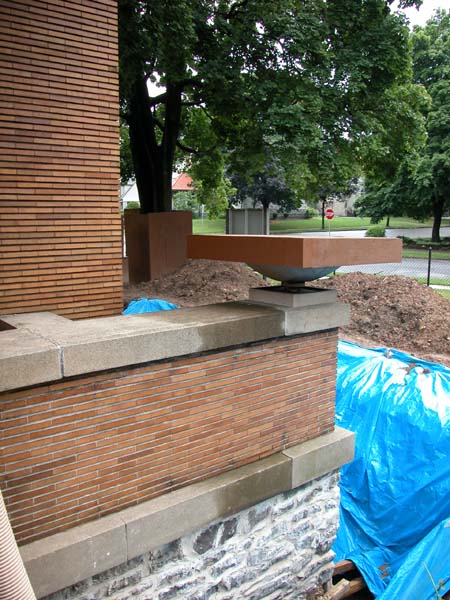