New Photos of the Sondern House 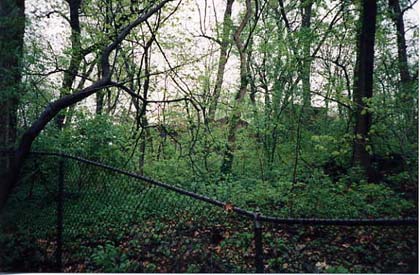 I sought out this house with my father on one of my many trips to the area.  My dad was a great companion for my many journeys of Frank Lloyd Wright discovery.  He was always fascinated by the things that interested me and was great at giving me an alternative point of view on things.  He found his own love for Wright when I helped him discover the Allen/Lambe house in Wichita, Kansas… about 2 miles from his home.

On this occasion, dad was very disappointed that we didn’t get to see anything of this house.  It was early on a rainy Sunday morning and he kept trying to come up with plausible scenarios that would justify us going up and knocking on the front door.  “Sir, Here’s your news paper.” was his favorite.  I, presumably, would have been subtly snapping photos as he handed the owner their Sunday paper. 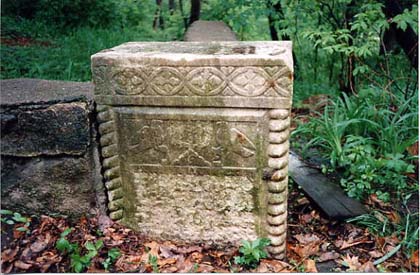 The stone at the entrance wall.

Finding this home was a bit of work.  The owners obviously like their privacy and Mr. Wright helped them with his design.  They’d built up a ridge in the driveway so that you couldn’t see the home from the street.  They changed the house number so it didn’t match the published address of the home.  They also planted a lot of trees and bushes that prevent the casual observer from peeping in.

It worked.  It was obvious to me, though not my father, that they wanted privacy.  I respected that.  I took a photo from down the hill and one of the stone at the end of their drive, and let them be.

My father and I had many great adventures in seeking out Frank Lloyd Wright homes and buildings.  I am sad to say that this was one of the last ones.  We toured the Allen/Lambe house not long before he died in 2001.  That is probably why it is one of my favorite homes. One of my only regrets with my dad is that we didn’t get a chance to go to Bartlesville, OK to see the Price Tower and home that are there.  He would have loved them.  We constantly encouraged each other to go, but by the time we were able to sync up for a trip, he was too sick to travel.

Clarence Sondern commissioned Mr. Wright to build this home in 1939.  It was completed in 1940.  The home demonstrates so many of Wright’s Usonian principles.  The home is single level with a flat roof.  Masonry sections provide the support for many walls of glass.  There are long overhang on many portions of the house and a carport for the families vehicle.  According to Storrer, this was the first home on which Jack Howe supervised the construction.

In 1948, the second owner, Arnold Adler contacted Wright to make an addition.  This greatly expanded the house and added additonal space for both living and for carports.  The whole layout of the house was changed, including the location of the front door.  Since the home was built near a hill, the expanded living room was built a few steps down from the rest of the house, allowing for a higher ceiling and clerestory windows.  The addition continued the use of tidewater cypress for the exterior and interior woodwork.

I got an e-mail in the Fall of 2003 from a man named Steve Murdick who lives near the Clarnece Sondern Home.  It had been up for sale this year and he and his wife had toured the home with the realtor.  He’d seen some of the info on my web site and e-mailed me about the photos.  He’s generously allowed me to host his photos on my web site.  In addition, he sent me images from the realtor’s web site and copies of the home inspector’s report.  I won’t post up the last two sets of things because I don’t have permission to and for privacy reasons, but I’ll keep them stored away for future reference.  Infinite thanks to Steve for sending me these photos.  I appreciate your willingness to let me host them. 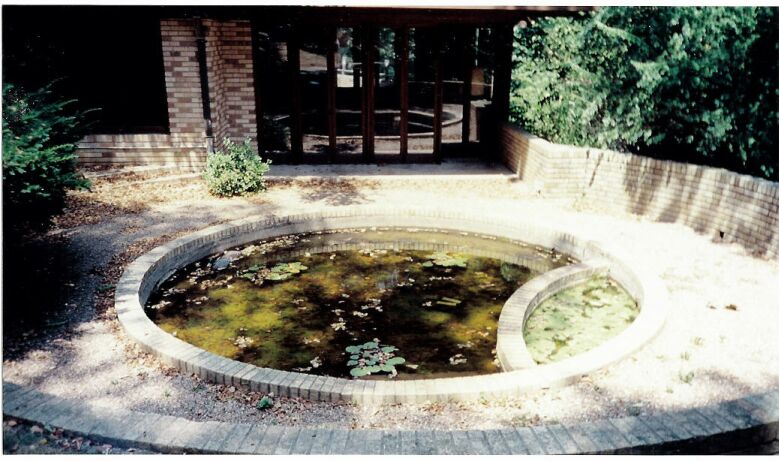 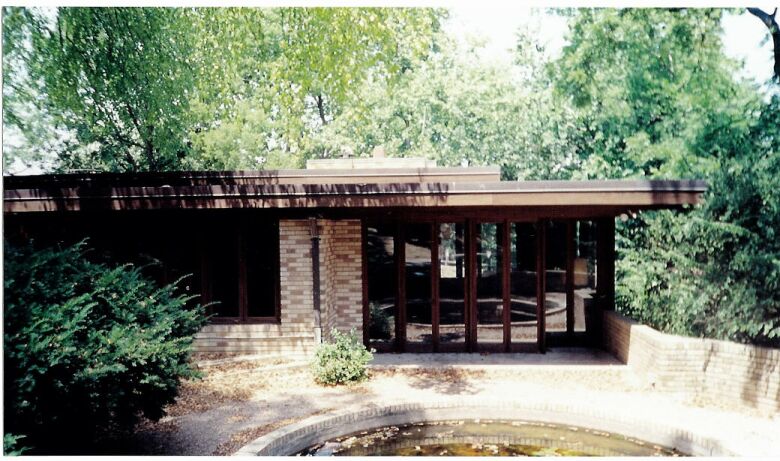 Outside the Living Room 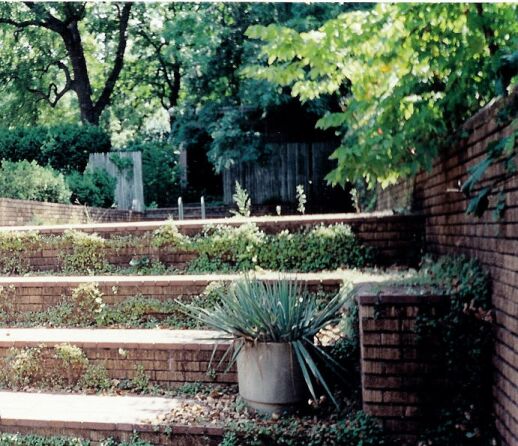 Fence and shed (not Wright) built after 1948 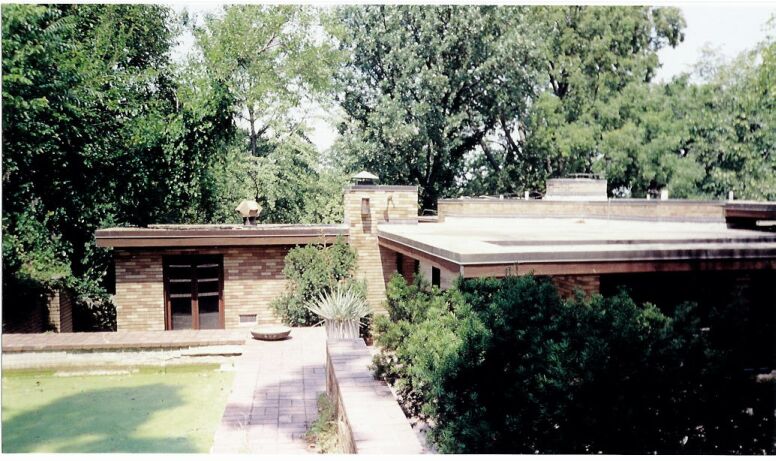 View from top of Terrace.  This is the Laundry/Heater rooms 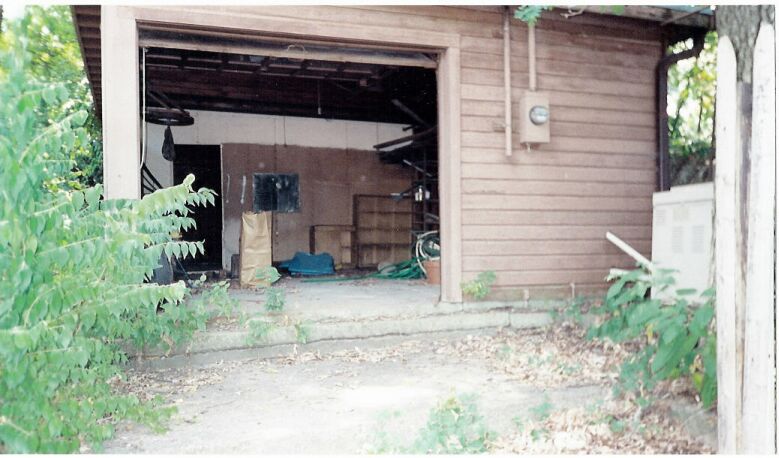 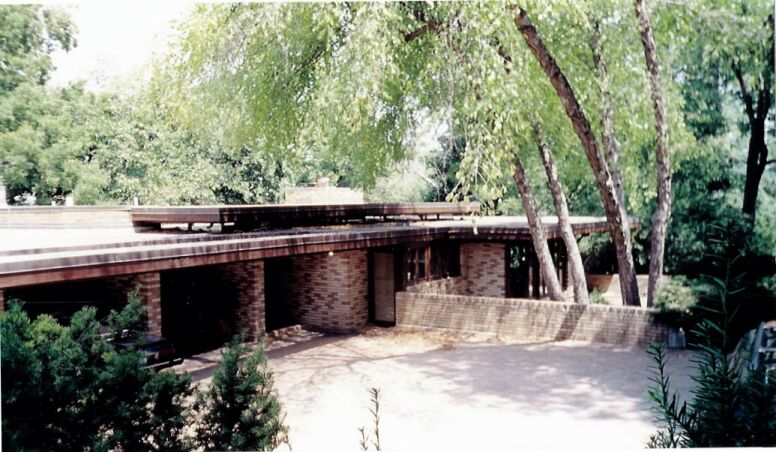 View of Carports and Kitchen area from top of Terrace. 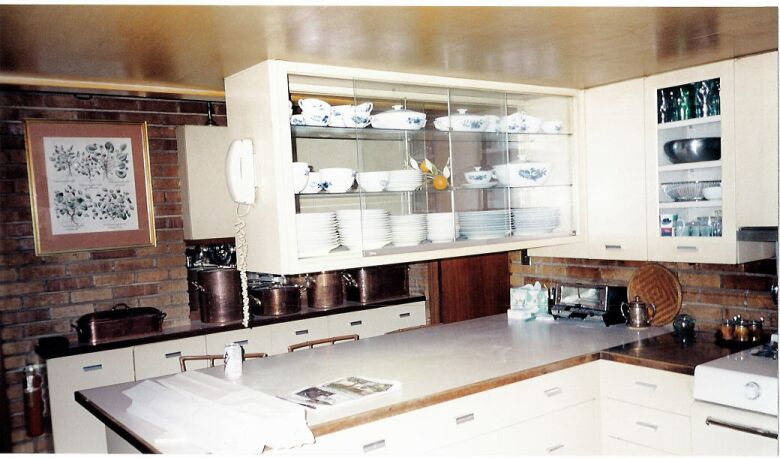 Metal Cabinets in the kitchen… looking in from the gallery 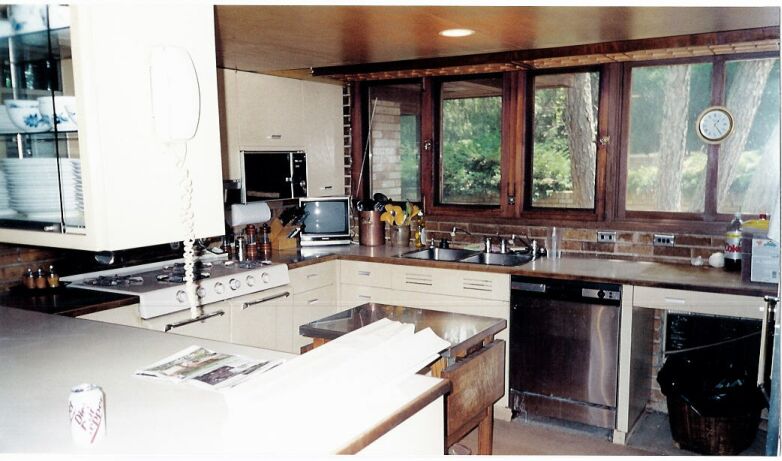 View from the other side of the Kitchen.  Notice the air conditioner behind the cabinet in the lower right corner. 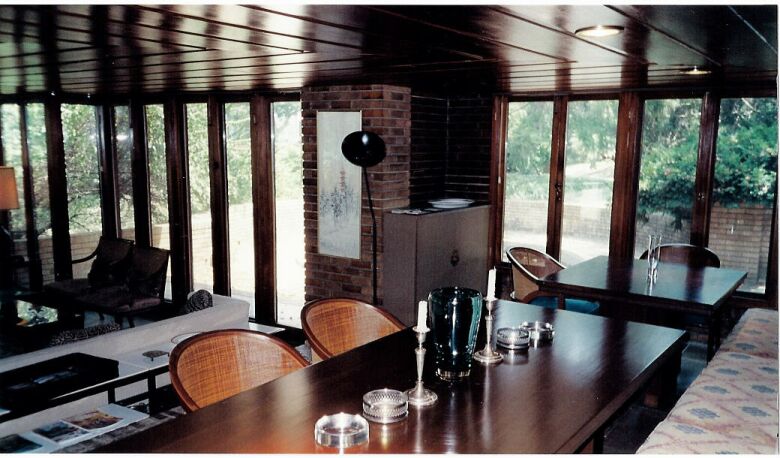 Looking into the Gallery and out to the plunge pool. 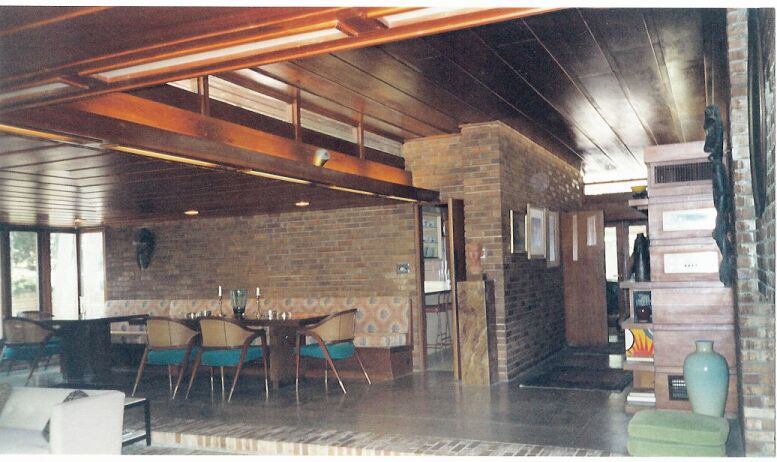 Dining area and Gallery.  The kitchen is beyond.  At the far right is a Wright sound system built into the wall.  It doesn’t work. 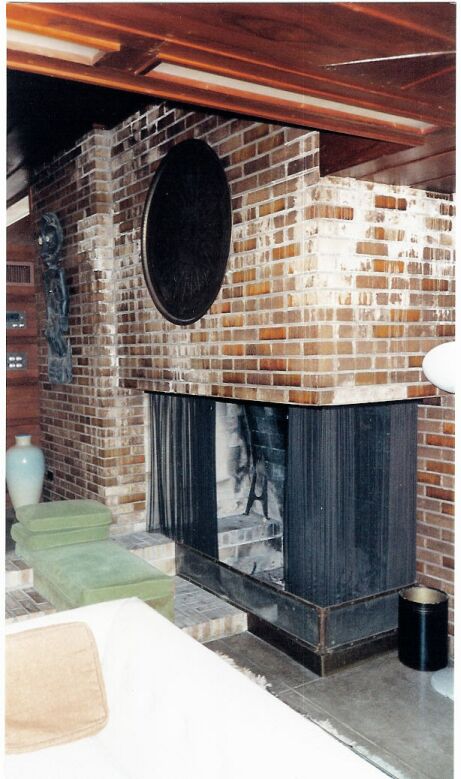 Living Room fireplace.  The fireplaces have serious damage and will need around $11,000 worth of repairs 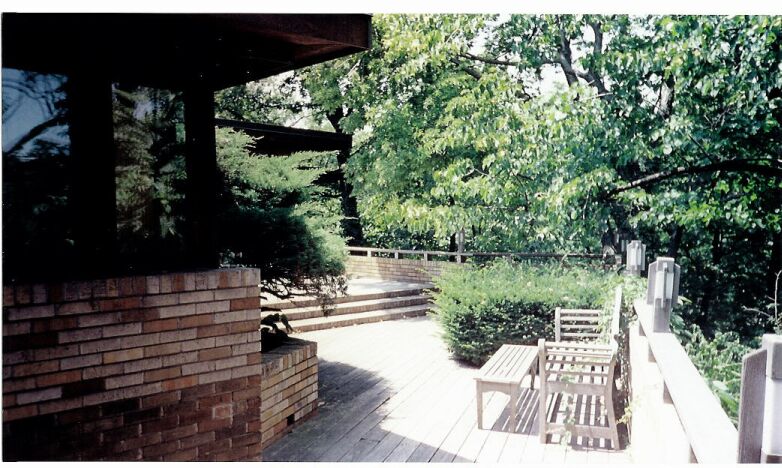 Wooden deck in the garden outside the living room. 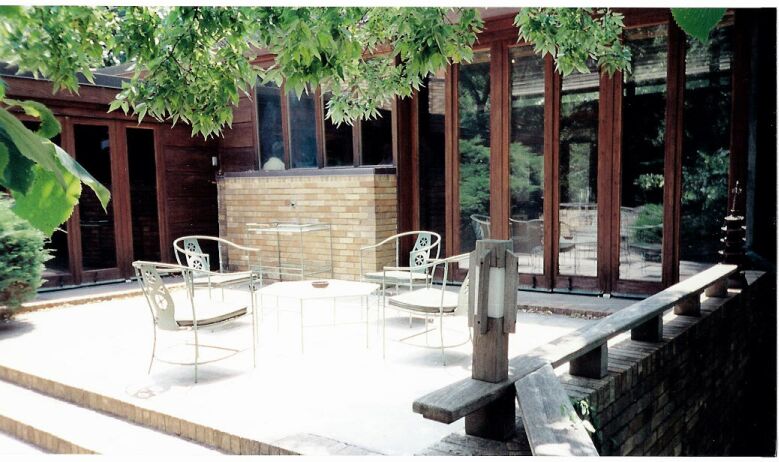 Terrace with nursery windows on the left.  The sitting room windows are on the right. 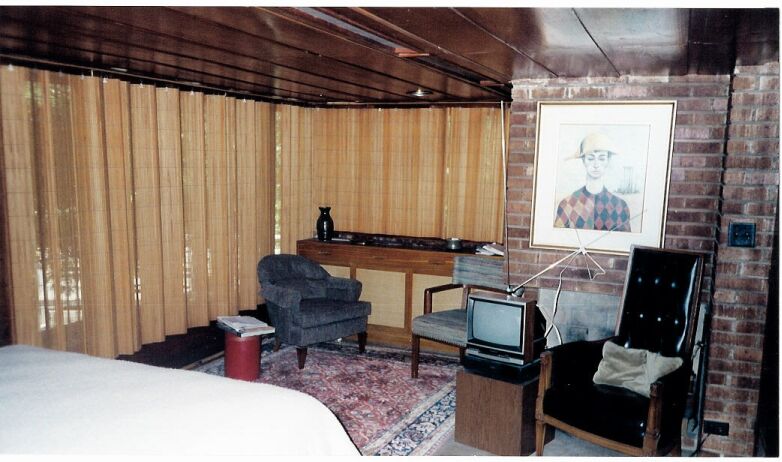 Master Bedroom.  The fireplace is behind the chair on the right 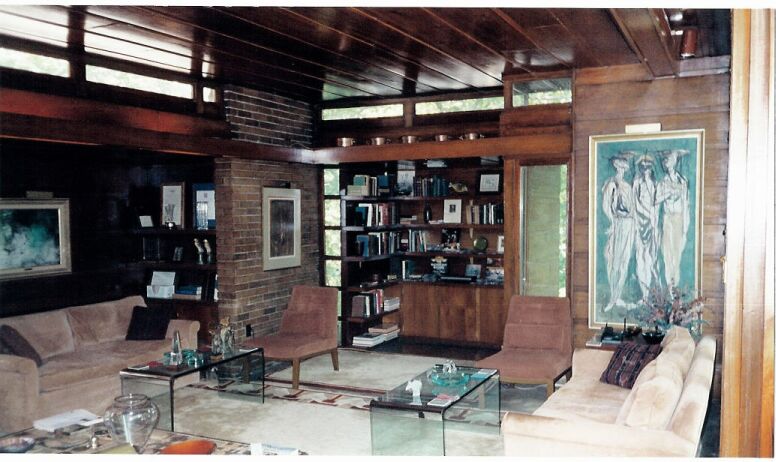 The sitting room.  This was the original living room. 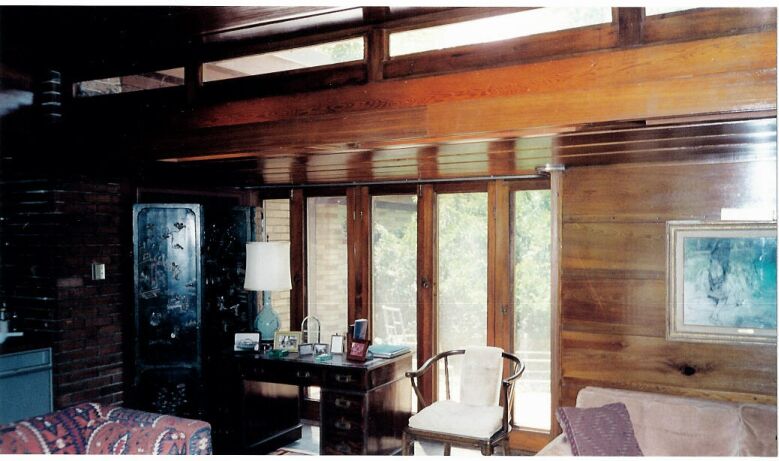 Sitting room looking toward the terrace 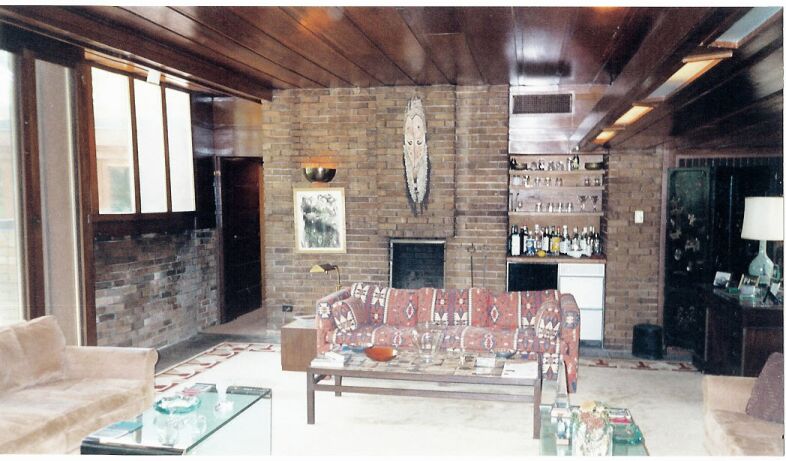 Looking at the sitting room fireplace.  Notice the wet bar to the right.  This was the original hallway to the original front doorway. 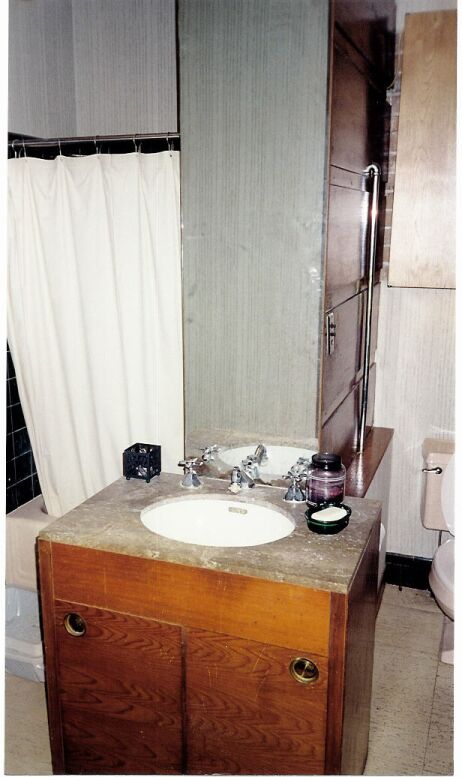 Bathroom right next to the entry . 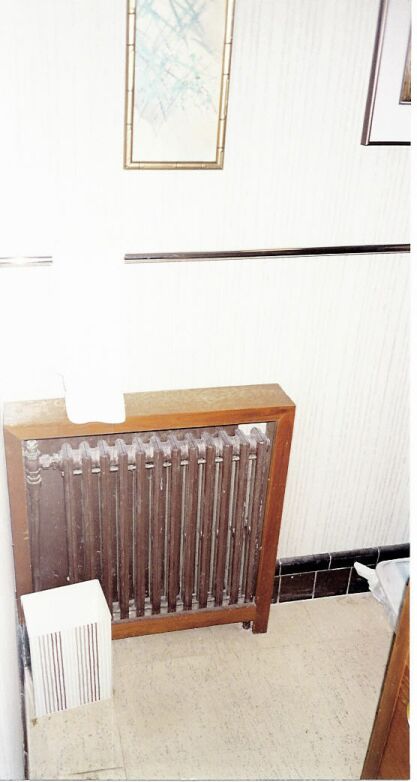 Semi hidden radiator in the same bathroom to the left of the vanity. 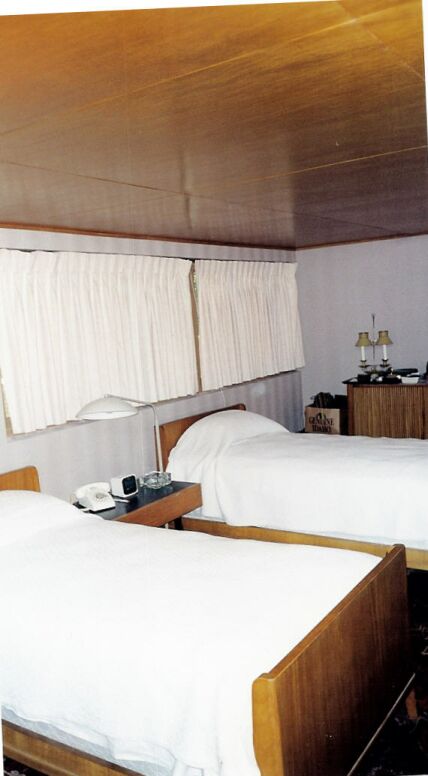 Servants bedroom.  This was used by the care-taker as the main bedroom.  This room originally was much smaller.  A wall was moved so that the heater room became smaller and the servant’s room is much bigger. 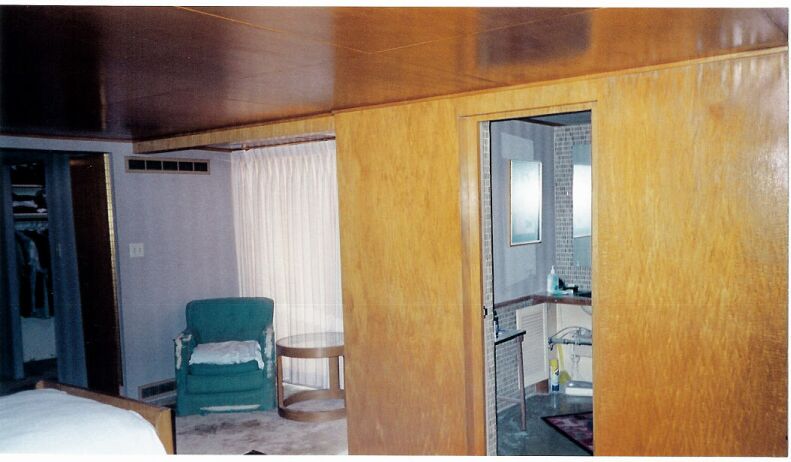 This is the enlarged area of the servant’s room.  Part of the heater room was turned into two large walk-in closets.  The sliding glass door goes out to the terrace. 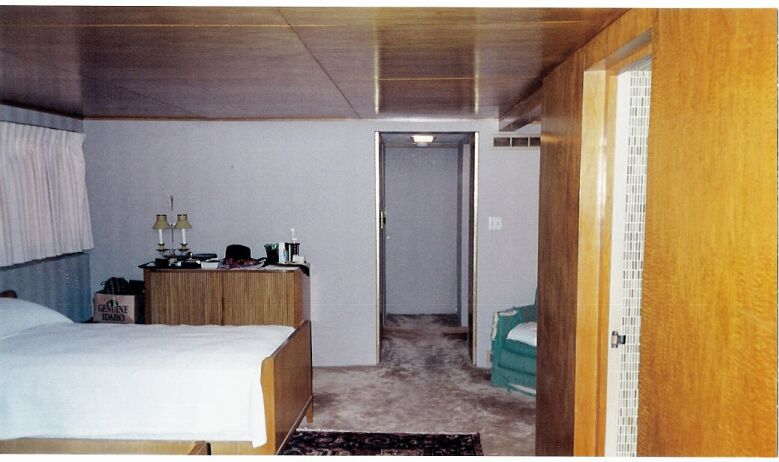 Another view of the servant’s room. 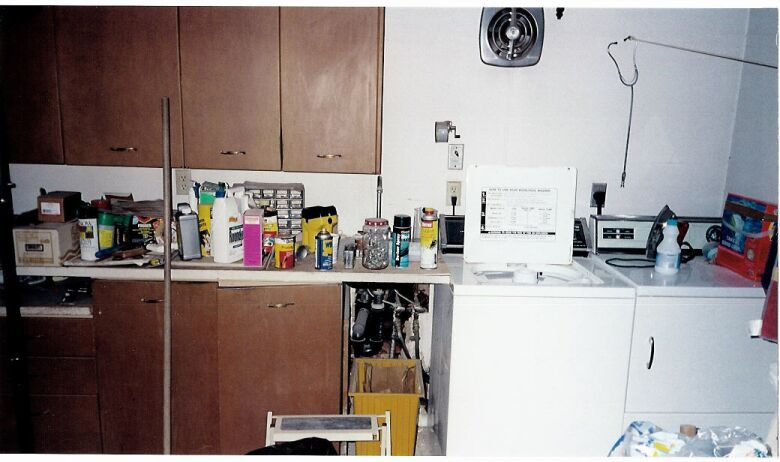 Laundry room:  This is what my friend Steve calls Frank Lloyd Wright’s nightmare. 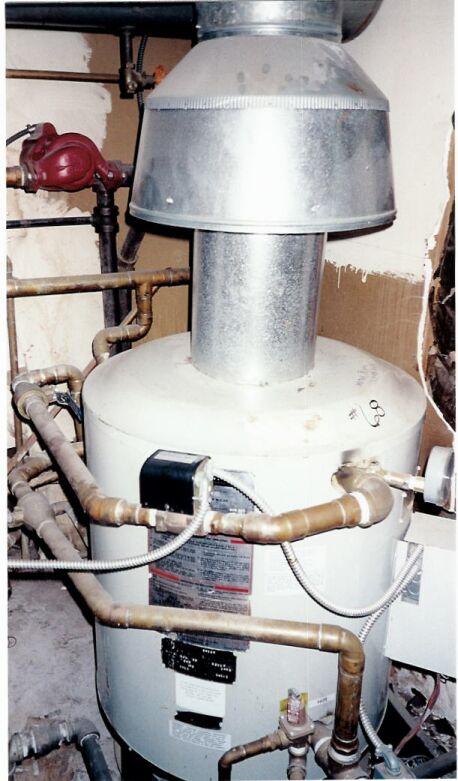 This is the water heater for the radiant heating. 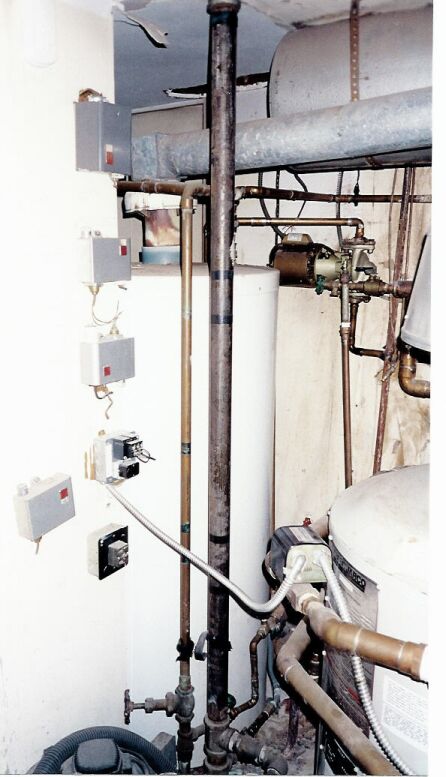 About three weeks after I got these photos from Steve, I got an e-mail from another reader of my web site who happens to live near the Clarence Sondern Home.  Tim sent me the link to his neighborhood’s home page.  On it there is a really nice article about the Sondern house.  You can find that web site by clicking here.