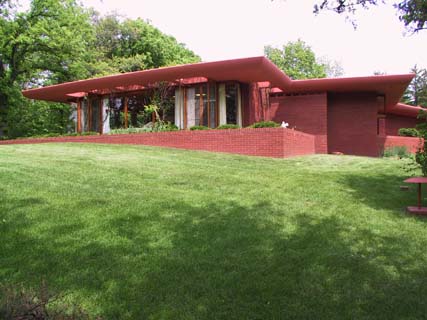 What the heck was I doing driving down a rural highway between small farm towns in the middle of Iowa?  On my way to meet my wife and friends in Oak Park, Illinois for the Wright Plus tour, I had a day and a half to kill….  So I decided to visit Cedar Rock, A home designed by Frank Lloyd Wright in the late 1940s for the Walters family.

The back of the house.

Located in the town of Quasqueton, Iowa on the bluffs above the very scenic Wapsipinicon River, the house is now the property of the state of Iowa and is run as a state park.  The Walters family donated Cedar Rock in the 1970s along with a trust to maintain it.

Another of my stitched photos that is slightly distorted.

The home is beautiful.  Pictures cannot do justice to this home.  Ive included some that I took, though very few of them give the feel of the home or the boat house.  The home is in quite good shape, though there is some water damage on the roof.

The home is open to tours.  I got a private tour since there was no one else around when I arrived at the visitors center.  I was allowed to photograph inside the home and I did get some good photos of the living room. 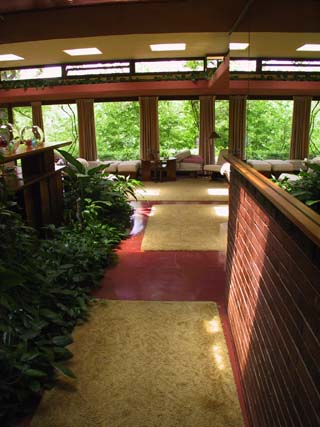 Walking into the living room.

The hallway into the living room is lined with plants on one side, and a brick and mirrored wall on the other.  The dark entryway is somewhat claustrophobic, but the natural light of the living room draws you  into it. 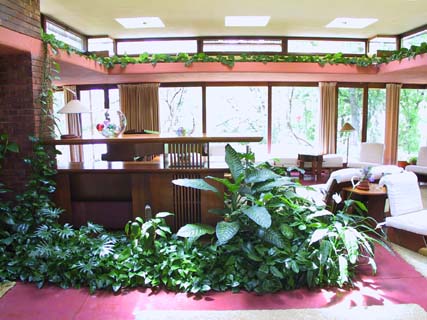 Most of the house plants in the living room are original from the 1940s.  That gives you a little idea of how wonderful an environment this is for them.  One vine goes up one wall and completely encircles the room.  They have to be trimmed back at least twice per year or they’d take over. 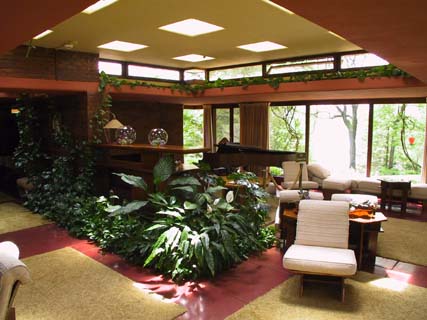 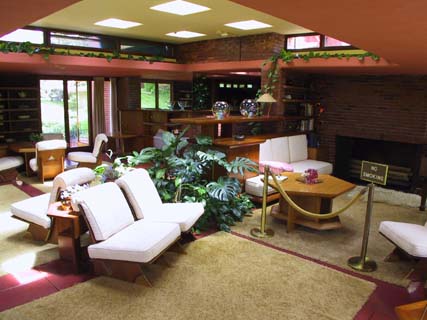 Wright designed the furniture too.

The woman giving the tour wouldn’t let me move the “No Smoking” sign, even though I promised to move it right back and I was the only person taking the tour that morning.

The piano was custom made by Steinway and Sons for the Walters.  Both Mr. and Mrs. Walters were quite short and a normal height piano was too tall for them.  This one was made to fit someone less than 5′ tall. 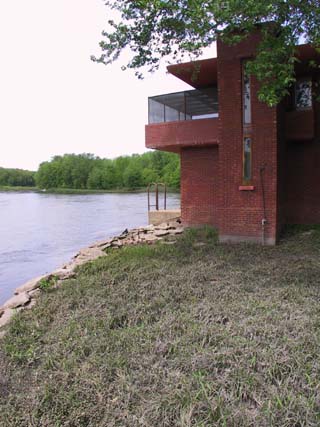 View from the boat house up stream.

The boathouse is very beautiful also.  It has a small screened in patio upstairs and a nice boat ramp and storage downstairs.  The river had flooded the week before I was there and you could see the high water mark about 3 feet up the side of the boathouse.  I imagine that is a common occurrence during the spring when the rains are frequent. 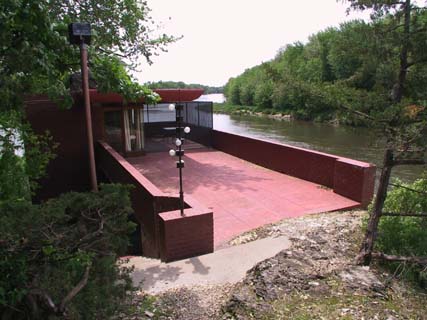 I can imagine spending a cool spring evening sitting out on the screened patio and watching the river flow by. I love the simplicity of the lamp.

The main house and grounds are so beautiful.  Wright placed the home perfectly and it really fits in with its surroundings. 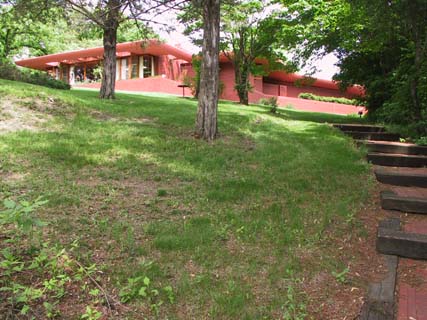 Main house from one of the paths to the boat house. 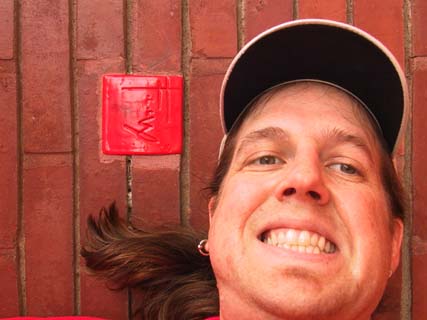 Hey, they put the bricks and tile in sideways!!!!  That’s not Wright!