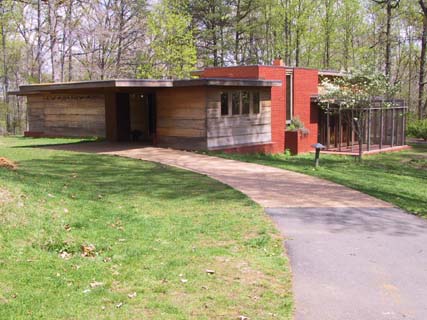 In the mid-1930s, Frank Lloyd Wright began designing more modest homes for the common man.  He called this design of home Usonian after one of the proposed names for the United States of America.  These homes were to be simple, functional homes that met the needs of small families and could be built for about $5000.

This photo is a little distorted since I stitched two photos together.  It gives you the idea of what the back of the home looks like.

At the time he started designing and building these homes, he was also working on homes for the Kaufmans and the Johnsons that were priced in the $60,000 – $120,000 range.  Building modest homes for small families seemed like a great departure from Wrights normal business.  But it was actually an idea that hed been nurturing for many years before.

Mr. Pope was a writer for the Washington Star newspaper.  His modest salary certainly wasnt sufficient to allow him to afford one of Wrights traditional homes.  Pope had read about Wrights Usonian designs and wrote to Wright to see if hed be willing to build one in Virginia.  Wright agreed and the rest was history.

The home that was built for Mr. Pope was built in Falls Church, Virginia.  In the late 1960s the home was threatened by the construction of Highway 66.  The current owner, Mrs. Leighey, arranged to move the home 16 miles to the grounds of Woodlawn Plantation south of Alexandria, Virginia.  The home is now cared for by the Trust for Historic Preservation and is open daily for tours from March through December. 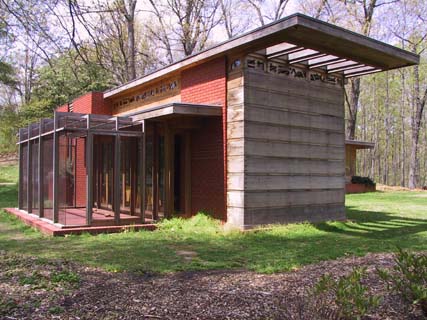 Most of Wrights later homes are designed on a particular grid pattern.  The Pope-Leighey home is set up on a 2 by 4 rectangular grid.  The floor is poured concrete with hot water pipes inside so Wrights unique radiant heating system could be used.  In the winter the whole floor is heated with these pipes in a way that makes the home very comfortable.  I was in the home early this year when the heating system was on and I was amazed at how well the system worked.  My feet were toasty warm and the whole house felt very comfortable.

The home is designed so that the roof is held up by masonry pillars around the fireplace and at the end of each wing of the home.  The benefit of this design is that the walls are not required to be structural members of the home.  As a result, the walls of the Pope-Leighey home are made from two planks of cedar sandwiched around an inner core of plywood.  The walls are 3 thick and seem to be quite good at keeping the cold out. 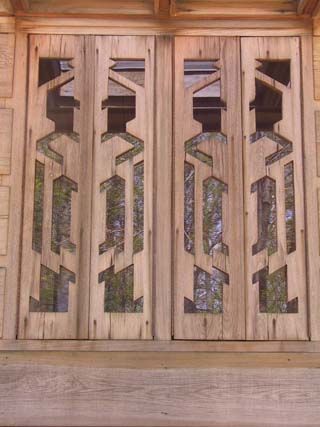 The Trust for Historic Preservation gives great tours of the home.  They blend a lot of the history of the home with that of Wright.  They talk about a lot of the design features of the house and how they fit into the daily life of the occupants.  They have done a great job of preserving the house under adverse conditions.  The people showing the house really seem to know their subject and enjoy sharing it with others.  Ive toured the home 6 or 7 times now and have learned something new every time I go.

Return to FLW in Virginia Page