View from the driveway of the McCartney House

Frank Lloyd Wright was known for designing beautiful homes for his clients.  He also had a vision for communities.  The whole idea behind his Usonian homes were not so much a bunch of individual homes, but a community of these homes grouped together.  These communities were attempted in many locations with varying success.  Pleasantville, NY, Galesberg and Okemos, Michigan were all places were numerous Usonian homes were built in (or attempted) in close proximity.  Parkwyn Village in Kalamazoo, Michigan is another of these communities.  According to Thomas Heinz in his book “The Vision of Frank Lloyd Wright”, a group of people who worked for the Upjohn Company contacted Mr. Wright to get him to help design their community.  The started with almost 50 acres that were divided up into 40 lots and planted with over 1000 trees.  These grand plans didn’t work out as well as they had hoped.  Only 4 Wright homes were built in the community.  They were built for the McCartneys, Winns, Browns and Levins.

Looking at the end of the Carport

The homes were built using concrete blocks that were initially constructed by the clients.  Later that task was contracted out. 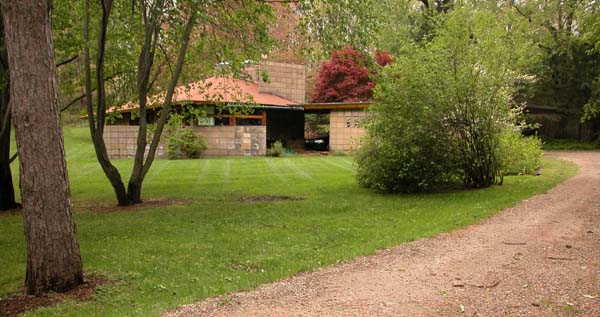 Looking from the driveway to the McCartney House

I talked briefly with Mrs. McCartney and got permission to photograph her home from the outside.  This was a wonderful opportunity for me.  I took a few minutes and walked around the house, snapping photos.  The peaked roof looks like a tent over the mid height walls.  The roof looks like its floating in air.

Another view of the carport and garden.