No examination of Frank Lloyd Wright’s work would be complete without an examination of his most famous building, Fallingwater.  Built in 1936 for Pittsburgh department store magnate, Edgar Kaufman Sr. and his family, the home served as a summer getaway for many years.  According to Thomas A. Heinz’ book The Vision of Frank Lloyd Wright Kaufman’s son, Edgar Jr. had read Wright’s autobiography and became a member of the Taliesin Fellowship.  Though he didn’t spend much time in the fellowship, he did encourage his father to have Wright design their summer home. 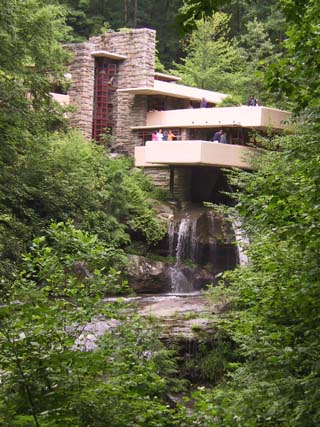 Fallingwater is arguably Wright’s most identifiable structure (along with the Guggenheim).  Many people know Fallingwater without knowing Wright (at least initially).  It was not only built at the height (or depths) of the depression as well as one of the real low points in Wright’s career.  This was the design that really put Wright’s career back on track and got him noticed again.

According to Heinz, the project almost didn’t happen.  After seeing the plans, Kaufman had significant reservations about the structural integrity of the design.  This angered Wright who withdrew from the project for a time.  The story obviously has a happy ending and construction proceeded when they worked out their differences.

We’ve visited the home more than a dozen times since we moved to the Washington, DC area in 1989. We’ve seen it in every season.  Spring and Fall are the best… unless you can catch it on a very cold snowy day.  Come to think of it, summer is great too, because you can then feel the cool breeze off the creek as you tour the living room… a perfect example of Wright designed natural air conditioning. 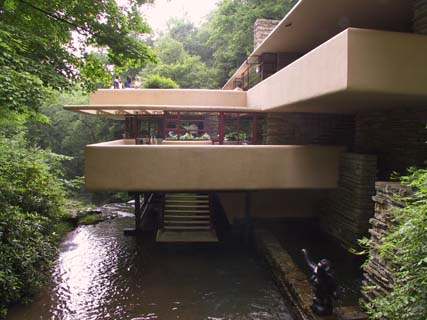 The living room and its patio 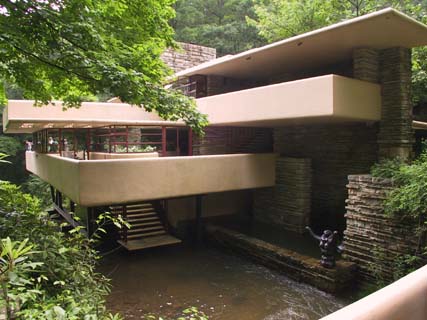 There is a bridge crossing Bear Run and leading to the house.  This shot shows the living room, its patio and the stairway going down to the water.  On the right is a spring fed plunge pool where the Kaufmans and their guests could take a dip.   To the left you can see the beams that have been installed to help hold up the sagging cantilevers. 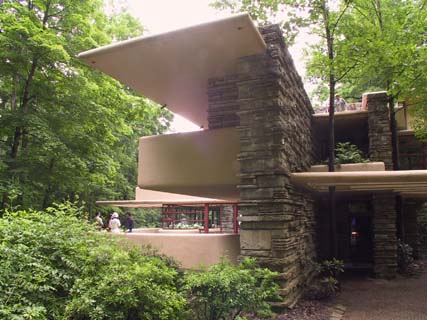 You can barely see the front door to the right of this photo.  It is well and truly hidden in the house.  Visitors would be driven up across the bridge and be left off here.  Their chauffeurs would then continue driving up to the garage area behind the guest house. 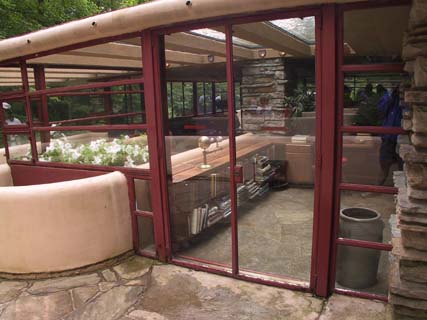 Inside the Living Room.

On the left behind the planters is the stairway that comes up from the pool above the waterfall. 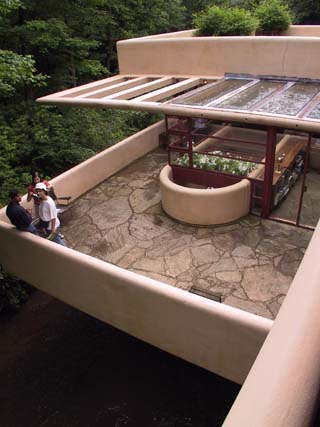 View of one of the porches from above.

One of the reasons this house is so wonderful is that it brings the beauty of the surrounding land inside the house.  The native stone that makes the patio floors as well as the stone chimney and bridge is also used inside the house.  It is even polished in places to make it look as though water is running over it. 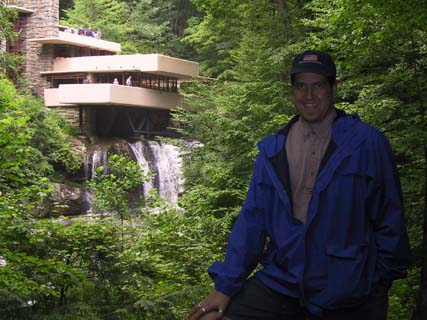 My Muggly Ugg in front of Wright’s Masterpiece.

Throughout the 2001 and 2002 tourist season, the home has been going through a major structural renovation.  It has been open to the public for tours again in the Spring of 2002 (or so I’ve heard) and the renovation should be complete in the next year or two.

Wright used some revolutionary design work to cantilever the house out over the waterfall and creek.  After almost 70 years of wear and tear, and millions of visitors, the cantilevers were showing signs of sagging.  Supports had been placed back in 1999 to help hold them up, but nothing short of a major structural renovation will get them back to their original shape.  That is the process that is underway right now.

We hope to visit Fallingwater later this summer to see how the progress is going.