The W.S. Carr house was built in 1916 on the bluffs overlooking Lake Michigan. You can see the lake in the distance in the first photo. You can also see the view from the beach up to the house in the second photo. Unfortunately if you go to that spot now, you won’t find this same view. No, Lake Michigan didn’t move. The house did. The Carr residence was demolished in 2005. If these photos look familiar to you, you may have seen them in Preservation magazine (the National Trust’s monthly publication). It is sad to see any of these homes be torn down, but especially one as old and well placed as the Carr residence.

The side that you’re looking at in the first photo has 4 bedrooms that were originally reached by a screened in hallway. Storrer says that the hall was extended a little and enclosed. The other side of the house consists of a large living room with lots of glass and kitchen. The living room originally had only screen doors out onto its terrace. This was truly designed as a summer home only. They’ve been closed in too. Overlapping between the bedroom wing and the living room wing is a small servants quarters and the bathroom.

The interesting part of this home’s history (besides being torn down) was that it had to be moved at one point because much of the hill over the beach collapsed and was threatening the house. Storrer describes that the home was not only moved back, but also rotated 180 degrees from its original orientation and placed over a basement foundation. 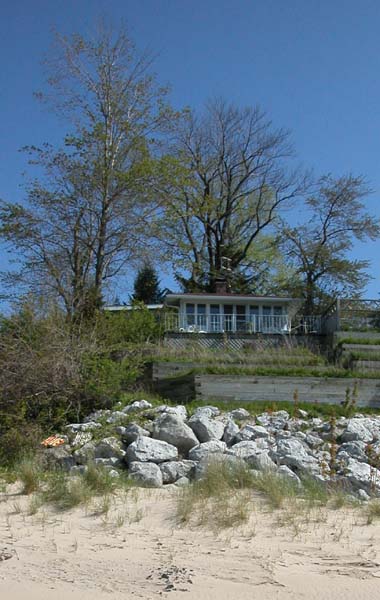