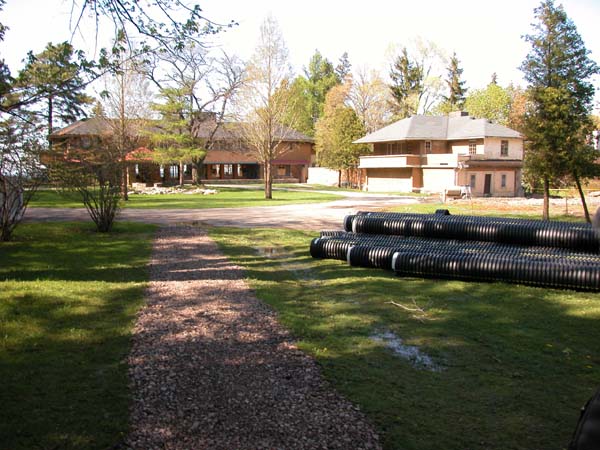 Graycliff on the left, The Foster House (Garage and Servant’s Quarters) on the right

Graycliff was built for Darwin and Isabelle Martin between in around 1926.  The Martins wanted a summer home away from their Wright designed compound in Buffalo, New York.  They settled on a piece of beachfront property on the shores of Lake Erie south of Buffalo in a town called Derby.  Mrs. Martin did not particularly like Mr. Wright at that time.  She was quite straight laced and did not really approve of Mr. Wrights unconventional lifestyle at the time.  Im not sure that she ever got over Wright leaving his wife and six children to run off to Europe with the wife of a client (who also left her husband and 2 children).  Mr. Martin finally prevailed upon her that Wright was the only architect to really build their home.  She agreed, but said that she wanted a lot of say in how the house would look. 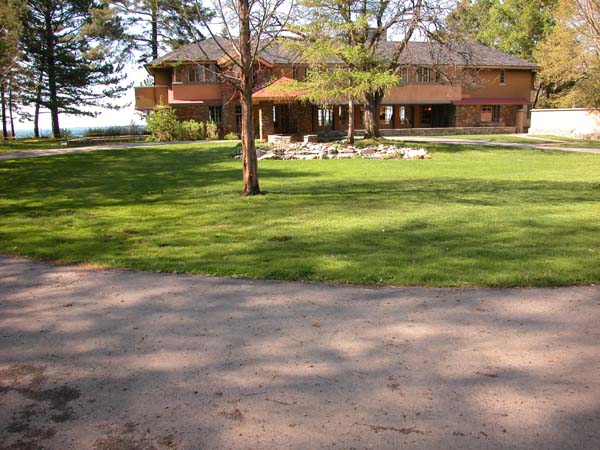 Graycliff from across the garden

Mrs. Martin wanted a house that was a bit more conventional than their home in Buffalo.  Her eyesight was failing, so she needed a home that was very open and light.  The home that resulted is beautiful.  The stone is native limestone quarried on site.  The wood is tidewater cypress that was brought north from Florida.  The home is a transition from Wrights early prairie designs to some of the designs that lead to his Usonian homes.

There are many elements of the prairie style in this home.  The home was designed and built with servants in mind.  The second building was connected to the first by a bridge that gave the servants access to the house, but also gave them quarters away from the main house.  The layout of the bedrooms and the upstairs hallway is very similar to that of the Allen/Lambe house in Wichita Kansas.  There is a long hallway with bedrooms on one side and a band of windows that dominate the upper half of the wall.  This not only provided a wonderful sense of light in the home, but it also provided what Wright called Gallery Space in the Allen/Lambe house.  It was a great place to display artwork.  Im not sure if that was his intention for this hallway, but that is the description that was given for the same sort of space in the Allen/Lambe house.

Graycliff from the Driveway

The entryway has a large porte cochere that gives shelter to those being dropped off at the home.  The red-shingled roof seen in the photos is similar to that that was originally installed.  The garden in front of the home is somewhat smaller than what was there back in the 20s, but it gives the same result of integrating the home with the site and bringing nature into the house.  The roofs are not the low-hipped roofs of Wrights early prairie designs.  These are steeper pitched and seem to go with the limestone walls at the ends of the house much better than an older prairie-style roof. 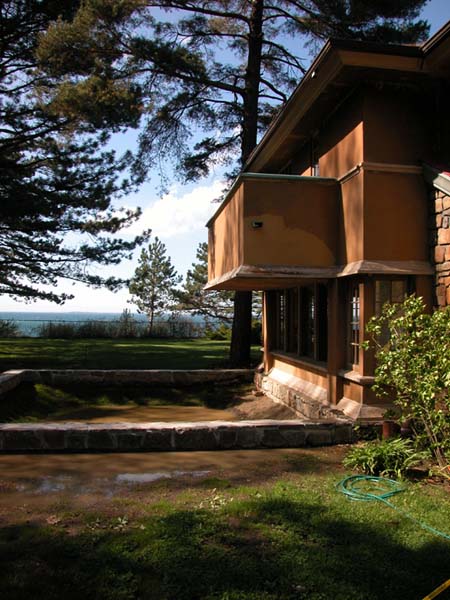 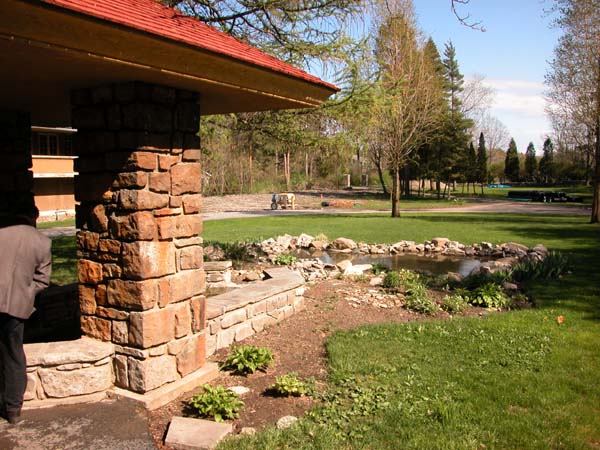 Garden and Pond in front of the entry

When you walk into the house, youre faced with a decision.  Twisting up to the left is a stairway that leads to the private portion of the house.  Though it is nicely designed and styled, anyone entering the home is immediately drawn to the light, open space that is the living room.  Wright guides everyone forward into the home using his well-known compression and release technique and makes sure that they leave the private side of the home to the people who live there and welcome any visitors to the public living room in the house.  Upon walking into the living room, a guest is rewarded with much higher ceilings and all that glass giving a view of the grounds and the lake. 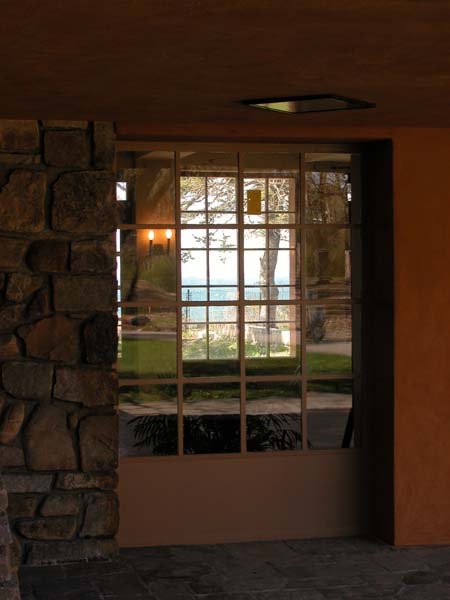 Looking through the house to the lake beyond

The downstairs living room area of the house is completely walled by glass on both sides.  It is easy to see straight through the house.  The doors are offset on each side to help regulate the flow of the breezes coming off the lake.  The large fireplace dominates the interior elements of the room, yet you hardly notice it at all since the windows lead out to such a beautiful view.   There is a beautiful reading nook to the left and a glassed-in porch that provided a nice place for indoor plants. 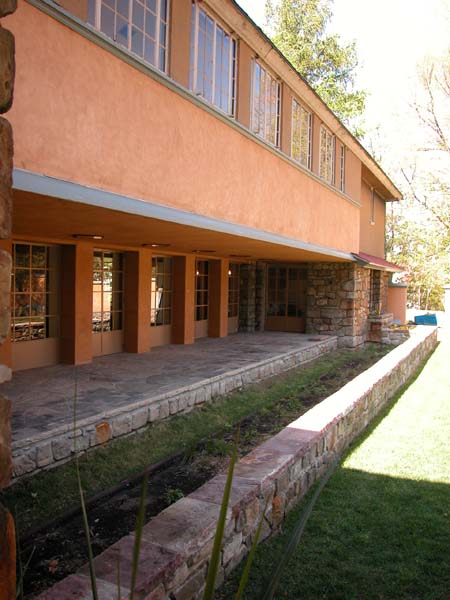 Upstairs is a truly wonderful place to live.  Mrs. Martins room has a large, balcony that overlooks the lake.  The bands of windows extend over the whole wall of her room letting in the afternoon sun and the sunset over the lake.  Mr. Martin snored, so he had his own room down the hall.  It was a little smaller and lacked the large balcony, but still has a great view. 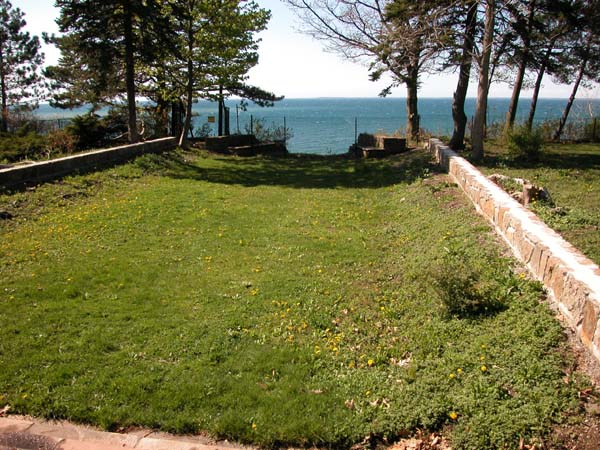 The yard between the home and the lake is quite beautiful.  At one point there was a nice place to sit and relax at the top of the cliffs.  Erosion has long since taken that pace away.  Years of harsh winter weather have taken its toll on the tower that used to give access to the beach over 100 feet below.  It is no longer safe for people to use. 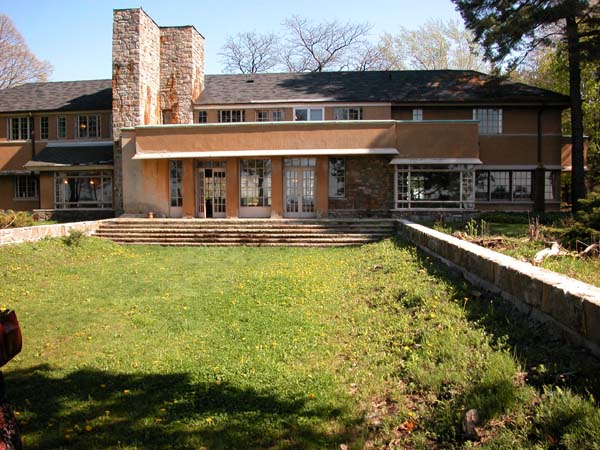 Back side of the house giving great views of the lake

The amazing thing about this house is the way Mrs. Martin influenced the design of the house.  She had very strong ideas about the home that she wanted and she was pretty much immune to Wrights charming personality.  That said, Wright made a lot of suggestions that she really liked.  They had a separate home that was originally designed to be a carriage house/garage and servants quarters.  As time went by, the Martins didnt have much in the way of servants, so their Daughter and Son-in-law moved into that house lived there for quite some time. 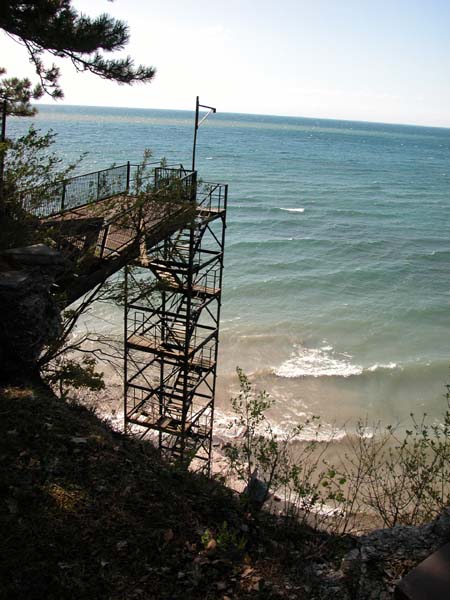 The no-so-steady tower that leads to the beach

The home has quite an interesting history.  At one point it was a religious school.  The main house had a chapel at the front of it which has since been removed.  There was a dormitory building that was added and blocked the garage from view.  This was recently removed by the preservation trust maintaining and renovating the house. 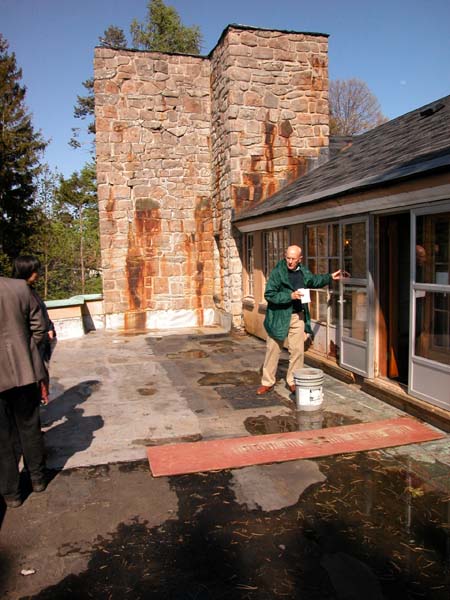 The home had problems with leaking.  The stains on the chimney were probably from an attempt by the previous owners to keep the water out of the house.  This has since been addressed with roof repairs. 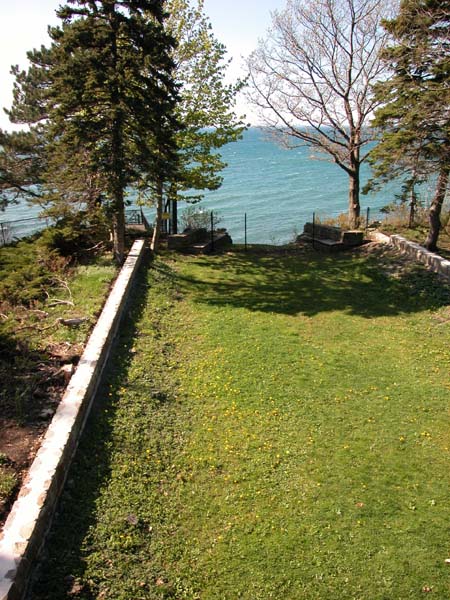 Mrs. Martin’s view of the lake. 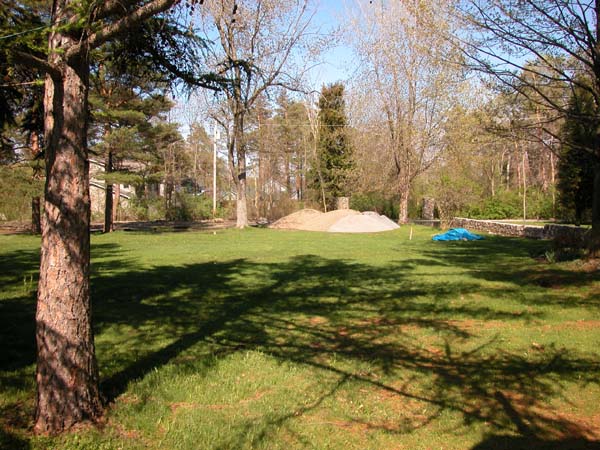 Looking towards the front of the property.

The Martins had originally asked for a home that cost no more than $16,000.  In the end the final bill was closer to $64,000.  It is not known whether it was Wright living up to his reputation for going over budget, or his ability to charm people into selecting details for their home that drove up the price.  This was a time in Mr. Wrights life where the Martins were responsible for helping keep Wright afloat financially.  That might have had something to do with the cost of the home. 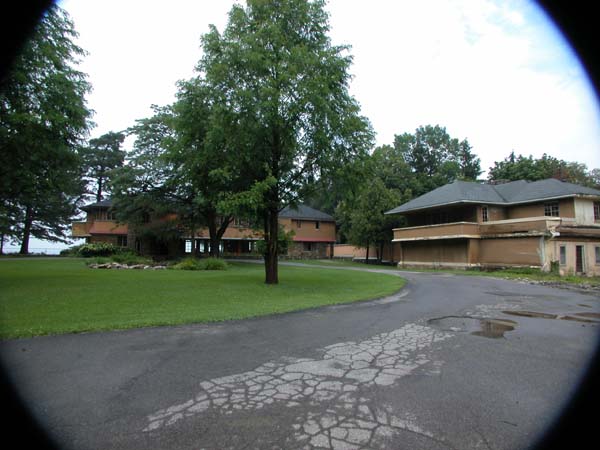 Graycliff and the Foster House

One of the interesting anecdotes that I learned about the house on this trip had to do with the fireplace.  The Martins used the fireplace for the first time during a dinner party.  Unfortunately they had not waited for the mortar to fully dry before doing this.  During the middle of dinner, numerous stones from the fireplace came shooting out into the hallway and dining room.  Needless to say this disrupted dinner.  A frantic phone call to Wright was all that it took to find out their mistake.  They didn’t use the fireplace again for quite some time to make sure the mortar was completely set. 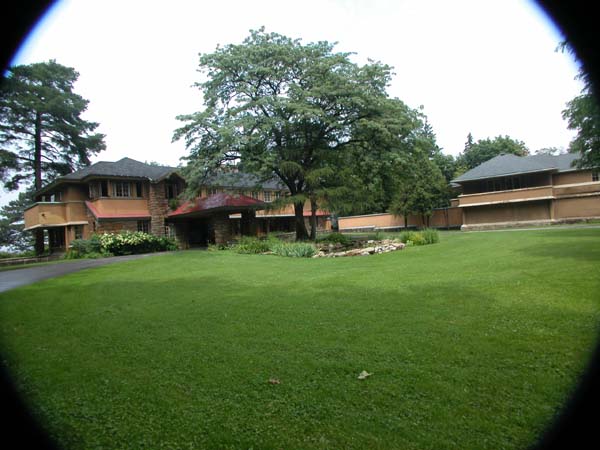 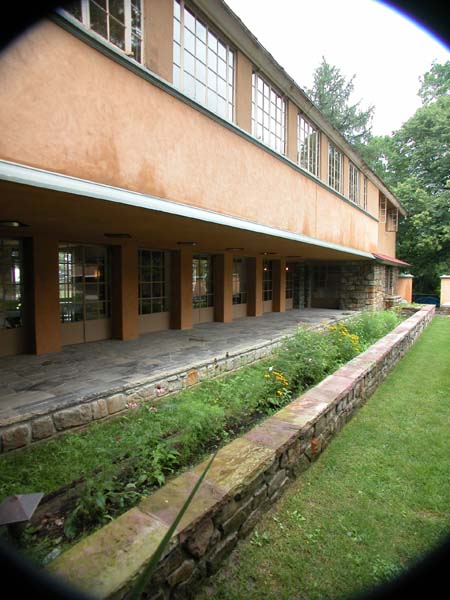 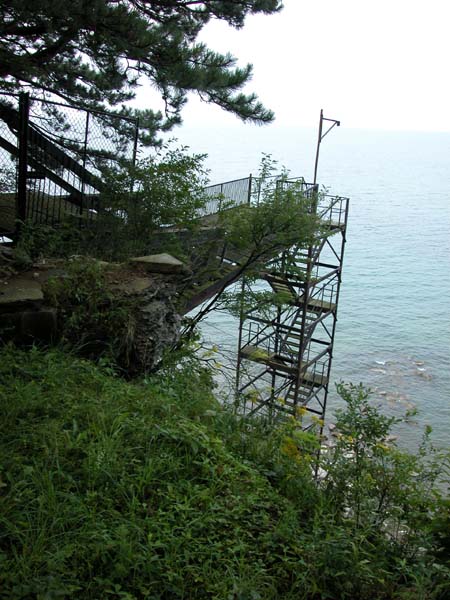 Tower to the beach 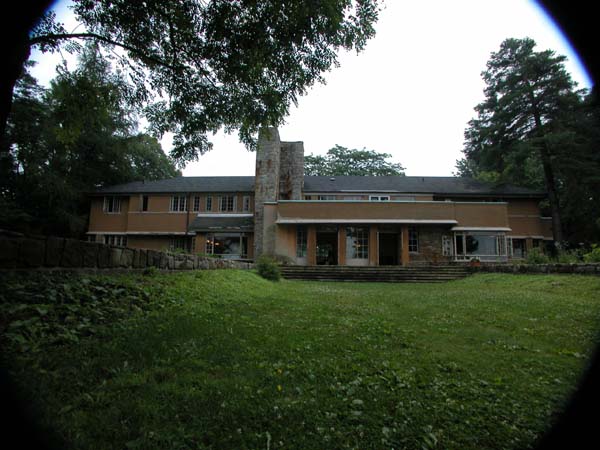 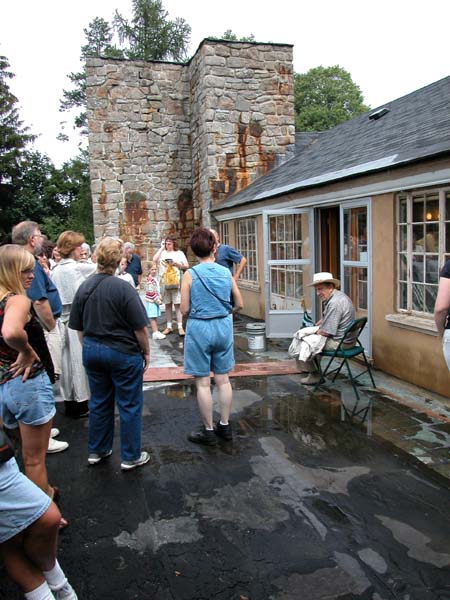 Chatting on the Balcony 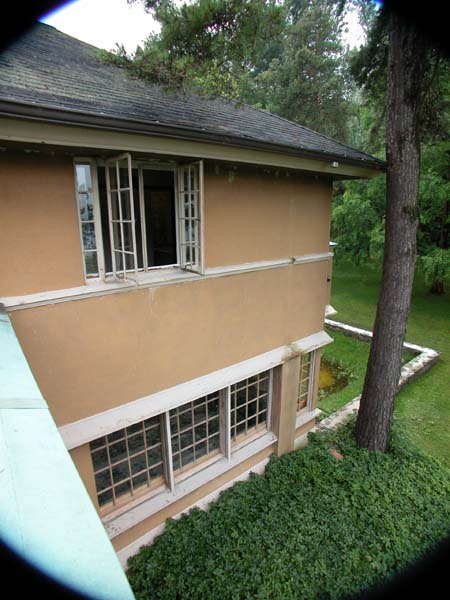