When trying to grow marijuana indoors, it is important to make sure the area you are growing your plants in is odorless. If the smell of the plant is detected outside of the room, there is a risk of revealing your grow location to law enforcement or nosey neighbors.

There are many grow tents on the market today, and while some claim to be “smell proof”, they can’t really be blamed for smelling up your home. In truth, a grow tent will not keep your home from smelling like weed, but it will keep the smell from being as noticeable.

There are many reasons that a grow tent may not be able to control smells in a house.

What increases the smell of a grow room?

Every grower knows the smell of a cannabis garden. It is a mix of flowers, dry grass, chlorophyll, and plant life. There are many factors that affect the scent of your plants. Some of these include cleanliness, humidity levels, type of plants, size of grow area, and ventilation.

The smell of a grow room can be irritating because it smells like a mixture of mold, chemicals, and weed. The smell is often caused by breaking down the chlorophyll in plants, which releases a chemical called trans-2-nonenal. However, there are many things that can produce this same smell. Some common examples include vinegar (acetic acid), wine (ethanol), nail polish remover (acetone), or paint thinner (xylene).

How to deal with odor in grow tents?

The following are some strategies to help reduce the level of odor in grow tents.

Odor control is an important aspect of grow tent management. There are a variety of options available for odor control, including exhaust systems and humidifiers. A humidifier can be used to increase the moisture output in the air, which reduces the potential for mold growth. Humidity levels should always be higher than 50%. Similarly, an exhaust system can be used to remove excess heat and harmful odors from the grow environment.

Carbon filters are devices that are designed to remove odors from the air. Carbon filters are often used in grow tents, greenhouses, and other confined spaces that produce stinky smells. Carbon filters work by attracting any gases that have an odor and then absorbing them into a solid material (usually activated charcoal). The activated charcoal then traps the odor molecules and prevents them from becoming part of the air. They also can capture gases like formaldehyde, ammonia, and nitrogen oxide.

In-line fans are an economical option for odor control in grow tents. They are typically installed to the ceiling of the tent, then attached to a duct that draws air along the length of the tent before being released outside. These fans have two main components, a fan that pushes air through an intake filter and up into the duct, and an exhaust filter that cleans the air before it is released. The cost of installing these fans is minimal compared to other options for odor control.

Odor absorbing gels are a new innovation in the cannabis cultivation industry. Odor is often an issue in grow tents and is often caused by bacteria, mold, and fungi. Odor absorbing gels can be used to combat odor issues by creating an oxygen-free environment. The gel is applied to the walls of the grow tent and then makes contact with the surface of the growing medium and roots of plants to promote healthier growth and reduce odor.

Air fresheners are typically used in grow tents to eliminate the unpleasant smell that emanates from the potting mixture. They work by breaking down volatile organic compounds (VOCs) in order to eliminate them. VOCs are often the cause of the bad odor, and they are also linked to cancer. Air fresheners reduce mortality rates for people who work in grow tents because they reduce exposure to these carcinogens.

Smell proof grow tents are typically made of plastic, which is odorless, and have an aluminum screen for ventilation with a seal on the bottom to keep odors from escaping.

The benefits of using a smell-proof grow tent are that it provides an environment where odors are not able to escape into the home or nose of passerby. It also keeps light out so that the plant does not become stressed.

The use of smoke-absorbing gels for odor in grow tents is a creative and innovative way of mitigating the issue of smelling like weed. Growers need to give their plants some love so it makes sense that they would want to provide them with the perfect atmosphere.

Smoke-absorbing gels, such as those made by Pot-O-Gel or Pots & Plants, are designed to work in grow tents. The gel absorbs the smell from your plants and masks it with a fresh scent.

Air purifiers are devices that are used to clean the air. They are usually used in places that have a lot of smoke or foul odors, such as grow tents. An air purifier can be used to absorb toxins and chemicals. It can also filter out smells so they don’t linger in the air.

How to deal with cannabis odor in grow tents?

The following are some strategies to help reduce the level of odor in grow tents with cannabis cultivation.

A good way to deal with cannabis odor in grow tents is by using cannabis odor-absorbing products. They are often referred to as dabs or cannabis dabs, which are concentrated cannabis oils that can be eaten, applied to surfaces, or consumed with a vaporizer. The major advantage of these products is that they do not emit strong odors like other methods for combating the problem.

Odor neutralizers are substances often used in grow tents to protect against odors. Odor neutralizers work by chemically bonding with the molecules that create odor and breaking them up, or scrubbing them off of surfaces. Some common odor neutralizing agents include activated carbon (carbon that has been heated enough to allow the carbon atoms to open their outer electron shell), zeolites (mineral structures found in volcanic rock), and antimicrobial agents.

A smell-proof bag for odor in grow tents is a permeable bag that you can put your plants into to avoid the smell escaping the tent into other areas. The gas exchange is still able to happen because of the permeable nature of the fabric, but it reduces the risk of any odors leaking out. There are many different types of smell-proof bags on the market, and they all work in similar ways.

In conclusion, grow tents are actually not smell proof. They do an excellent job at keeping out mold and pests that would cause the cannabis to rot. The grow tent does not keep smells in or out, but it is a necessity to have if you plan on growing cannabis indoors.

Potential customers should be aware that grow tents are not actually “smell proof.” When someone grows cannabis indoors, they must invest in a grow tent to contain the plants and prevent them from being infested by pests. 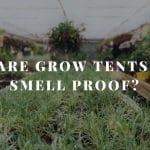 Grow tents are not odor proof. Grow tents can still smell of marijuana even though they are made to seal the odor in and not leak outside. The grow tent provides a contained area for people to grow plants indoors, while still protecting the plants from bugs and animals.

Research indicates that grow tents do not successfully hide the smell of marijuana.
Some studies have found that odors can still escape through venting holes in grow tents, while other research has found that the smell of plants being grown may leak out through slits in the fabric.

Do grow tents keep the smell in?

The quality of grow tents is one of the most important aspects to consider when purchasing a product.
The main purpose of grow tents is to give plants a more natural environment, but they do not have any additional airflow which can cause different problems.
Grow tents work by sealing in odors and will only allow the smell to escape when there is a hole in the fabric or a broken zipper. Additionally, because carbon filters cannot fit inside these small structures, fans are necessary for ventilation purposes.