There are very few Wright homes that are still inhabited by their original owner. The Boswell residence is one of these few.  (Click here to read an update.) Built in 1957, it is a large “L” shaped home placed on the side of a hill in the suburbs north of Cincinnati.  In any season but Winter the home will be completely invisible to anyone who is not invited onto the property.  Luckily I drove by in the winter. 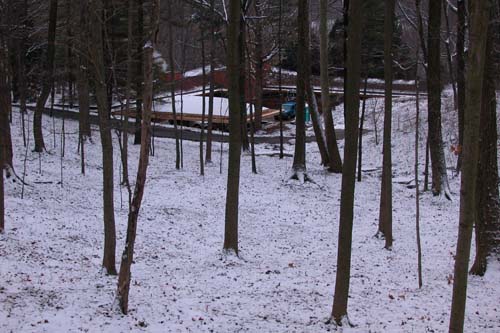 As you can see from the photo, the home is under construction.  The “L” plan home appears to be re-invented as an “F” plan house.  I couldn’t get a good view of the construction being done, but it appears that the carport has been built in and the new part that makes up the “F” part of the house will be the new carport.  I could be completely wrong about this, but that is what appears to be going on. 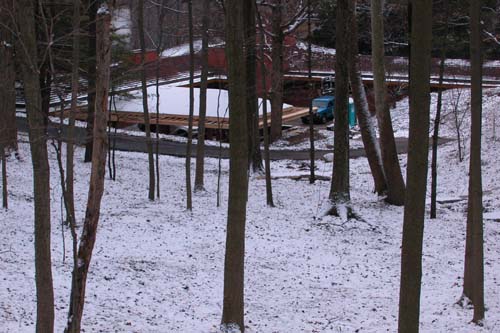 Close-up of the construction site.

The roof line of the new addition appears to be in harmony with the rest of the house.  The long “S” shaped driveway circles around a hill and down to the house.  There is a large square shaped living space that consists of an open living room with class on 3 sides.  The windows are lined with planters and look off into the woods.  At each side of the living room are the dining room and a private study, the latter of which has a wonderful view of the woods. The two long wings that make up the “L” come off the main living space in the North and West directions.

The home was not completed until 2 years after Wright’s death under the supervision of the Taliesin Architects.  The service rooms are located down one wing of the “L”, with a kitchen, breakfast nook, laundry, a bathroom and tool room as well as servants quarters and a large playroom.  This is the wing that is having construction added to it.  The other part of the “L” contains 5 smaller bedrooms, 2 small baths and the master bedroom suite with master bath, walk-in closet and dressing room.

Looking at the plans tells you that this is a HUGE house.  Though it doesn’t look that big from the outside, this home could comfortably sleep a family of 12 with room for 2 live-in helpers.  They use space very well.

Update: I have found an interesting story surrounding this home.  It would seem that my information at the top is somewhat dated.  Mr. Boswell died a few years ago.  I received a message from someone who attended a conference at which his daughter spoke.  She was the executor of his will.  As the story goes, she sold the home for approximately $1,000,000 less than what was offered by a developer.  This was done to keep the home from being demolished.  At this point the woman’s siblings have taken her to court, suing her for selling the house for a lower price than what was offered.  Hopefully we’ll hear something more about this in the future.